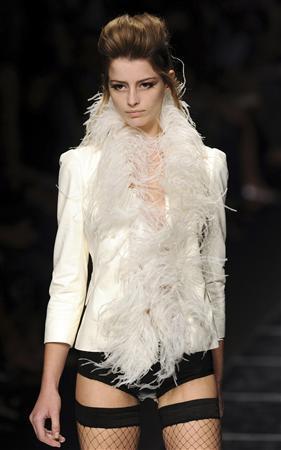 A model presents a creation as part of the John Richmond Spring/Summer 2010 women's collection during Milan Fashion week September 27, 2009.

MILAN - Designers at Milan fashion week preferred the demure to the provocative in womenswear collections for next spring, with some names sticking to their roots and what they are best known for to woo crunched buyers.

As the warm season brings out more of the skin, designers in Italy's fashion capital made sure to show off the flesh with bare backs, one-shouldered outfits and high hemlines -- from small dresses and skirts to 1950s-style high-waisted culottes.

Giorgio Armani, known for his classically elegant lines -- looked to body art for his spring/summer 2010 collection, using linear cuts to show off bare shoulders and legs.

He sent out models in short dresses -- for both day and night -- and slit skirts that revealed shorts. Rounded-shoulder jackets were paired with loose ankle-length trousers. All models wore flat shoes, a rarity on the catwalk.

Miuccia Prada continued with her deconstruction theme -- grey silk jackets were stitched together at different lengths and white knickers peeped out from baggy boxing champion shorts. She threw a net of chandelier drop glass beads over a white mini shift to emphasize a contemporary and nostalgic feel.

"I enjoyed myself so much (with this line). It's imaginary corridors, hotels," she said. "I think it's very sellable."

She used candy pink and acid green for slinky print mini dresses and mixed stretchy knit tight-fitting tops with skirts covered in metallic triangle patches. Cream leather was worked into pleats and then stamped with rivet-like emblems. Chiffon versions of the prints in floaty folds came out for the evening.

Roberto Cavalli had a soft look and colors stuck to an emerging theme -- creams, pale pinks, ivory, magnolia and grey.

Gucci's Frida Giannini broke with the overall mood to mix athletics and aesthetics, with cinched and laced outfits with rubber or metallic clasps. Models wore white short dresses or trousers and jackets spliced with rubber lacing or closed with zips. 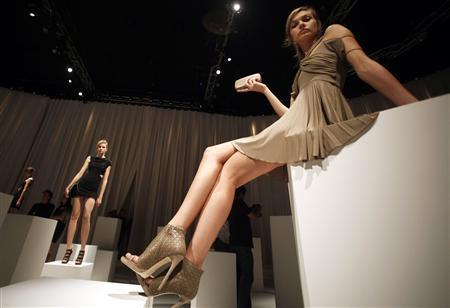 "I was inspired by a kid's karate class. Colored belts for different grades and the whole canvas and beach colors," he said. His bright evening gown evoked pure glamour.

At Salvatore Ferragamo, jodphur and riding coats set the tone with its trademark silk prints keeping a low profile.

Like at other shows where towering heels reigned supreme, Ferre shoes sported crucifix heels. Heels were also high at Versace and Gucci whose version had wide leather ankle bands and criss-cross strap fronts. At Frankie Morello -- where the theme was horse riding, some shoes had horse-like tails at the back.

Its woman for next spring has banished black so as to not focus too much on "today's gloomy situation," a show note said.