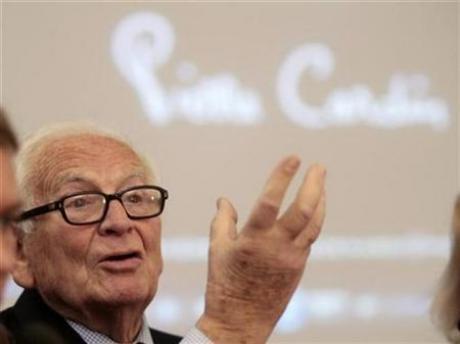 Today's fashion designers change styles much too fast, partly due to twice-yearly collections, making it harder to create couture that lasts for years, designer Pierre Cardin said on Tuesday.

In Tokyo for a show co-sponsored by a Japanese department store, the 88-year-old doyen of French fashion also said that it is now much harder for designers than when he first started in the business roughly 60 years ago.

"After the war, there were very few designers. Now there are so many designers around the world, in every country. It is impossible to change the fashions every year, every six months," he told a news conference.

"There are lots of designs that are very beautiful, crazy, fantastic on the eyes, but they are not making fashion for tomorrow. You can see it anywhere... but four or five years later, no fashion."

Cardin also said that when he launched his own label in 1950 he was told that what he was doing was "impossible" and that only belief in himself and obsession carried him through.

"At the time I was told that trying to make what I did was like trying to walk on the moon -- impossible. It was my strategy to believe that one day a man goes up," he said.

"My work was like an addiction. That's why I've been able to do it for so long."

Cardin has become a household name on products around the world from couture clothing to alarm clocks. He was the first Western couturier to turn to Japan as a high fashion market in the late 1950s and China in 1975.

The designer was expelled from the Chambre Syndicale -- the monitoring body of Haute Couture in Paris -- for launching a ready-to-wear collection in 1959, but was soon reinstated.