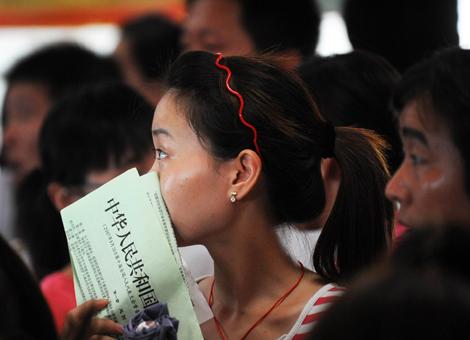 A new college graduate hesitates before handing over her curriculum vitae during a talent fair in East China's Anhui province. [Zhang Yanlin / For China Daily]

BEIJING - Few can say they are as lucky as Ben Southall, who won a competition entitled "The Best Job in the World" to become caretaker of a beautiful tropical island on The Great Barrier Reef off Queensland, Australia. However, that doesn't mean most people do not aspire to a level of job satisfaction higher than that of another rodent in the rat race.

Now, thanks to more sophisticated human resource departments in Chinese businesses and the booming economy, job hunters are finding they can be spoilt for choice while at the same time finding stiff competition from their peers.

Typical is Wu Xiaoshu, a recent English literature graduate from a top Beijing university. She has spent many a day traveling from interview to interview during the hot summer. Dressed in a smart but uncomfortable suit and wearing high heels, she has carted her resume and photos back and forth in pursuit of the perfect position.

"Most of the vacancies I have applied for are at State-owned enterprises involved in education, culture, media or consulting sectors. I want to fully take advantage of my skills and personality and I prefer to have a stable working environment and income," she said.

Wu responded to a survey conducted by ChinaHR.com, the nation's leading online recruitment portal controlled by premier global online job finder, Monster Worldwide. It was drawing up an up-to-date picture of the attitudes of this year's new graduates towards their career planning and unveiled the 50 best employers as voted for by those surveyed.

According to the report, China Mobile is the graduates' first choice for a prospective employer, followed by Alibaba, Haier, Microsoft China and Bank of China. Some 60 percent of the listed employers were newcomers.

The annual survey, begun in 2002, polled more than 200,000 college graduates at 700 universities across China, including Hong Kong, Taiwan and Macao.

Ouyang Hui, director of the Human Resource Research Center at ChinaHR.com, said: "With the growing success of Chinese enterprises, along with their great efforts to improve their status and brands, they occupied 46 positions on the 50 Best Employers list, becoming the biggest winners in the rankings."

The global financial crisis greatly influenced graduates' concerns about salary cuts and lay-offs at multinationals. Only four foreign firms - Microsoft, Google, Jardine Matheson and Procter and Gamble (P&G) - appeared on this year's list, down from 21 in 2009.

Forget diamonds, penthouses and antiques. The most valuable thing in the 21st century is skill. Human resource experts said that maintaining a pool of talent has become one of the biggest challenges for multinationals as their Chinese counterparts start to behave more competitively over recruitment.

It used to be the case that many Chinese graduates were more attracted to overseas companies with operations in China because they offered better compensation and more opportunities for training and promotion.

Vivian Fang, a postgraduate student in economics from Shijiazhuang, the capital of Hebei province, received four job offers and finally decided to work at a State-owned pharmacy company.

She said landing a job with a company such as China Mobile or Bank of China was now considered better than working for an international firm because it provided greater job stability and a better income.

"What's more, many Chinese companies also have 'big names' worldwide which is helpful for my future career improvement and job-hopping," she said.

Edward Lo, executive vice-president of Monster worldwide Greater China, CEO of ChinaHR.com, said: "Three years ago, Chinese enterprises had little sense of reaching out to potential employees and in consequence they did not figure significantly among the 50 best employers. However, thanks to the booming Chinese economy, many Chinese enterprises have become number one globally in their sectors - for example the Industrial and Commercial Bank of China. Many of them have started luring talent domestically and from overseas. We are helping them look for talent everywhere they've put their footprints."

Ouyang, from ChinaHR, said: "When we are talking with Chinese college students about what they are looking for from a good employer, they always stress they want a platform upon which they can demonstrate and develop their talent and expertise. Our survey showed that graduates have become more mature, intellectual and realistic in developing their careers. For Chinese new graduates, money is not supreme when they are planning their careers and making work decisions."

Ouyang said the recently graduated prioritized certain factors including specific routes for career development, employee welfare schemes, fair and transparent employment principles and a strong position in their own industry. They also attached importance to a sense of harmony in the workplace.

The ChinaHR survey showed finance, investment and insurance was the favorite sector for career-minded Chinese college students with 10.1 percent of the vote. A total of 7.4 percent of respondents chose governance and public affairs.

Experts said financial jobs with high salaries had always been popular but the interest in governance and public affairs could reflect many students' desire for stability following the financial crisis.

"We predict that in the coming year, we will be able to offer at least 5,000 posts," Chen said.

Ouyang added that Chinese students have been attracted by emerging service industries with higher intellectual requirements. "It also reflects the economic boom in Chinese society," he said.

Hu Chao, senior human resources manager at Lenovo, said: "There are many students who are confused over their career planning and lack a clear career direction. I think it is to some extent because of the diversification of society with a great number of fresh opportunities appearing every day. It is difficult for them to decide which sector to work in as so many options are available and more and more interesting new options are appearing."

Hu suggested career planning courses should be introduced in middle or even primary schools to help students get to know about various professions and their possible career prospects.

In the coming 10 years, more than 7 million professionals will be needed in the fields of education, political science and law, medicine and health, publicity and cultural information, as well as disaster prevention.

In this year's annual survey, ChinaHR added questions about working in undeveloped or developing regions of Western China in response to the government's campaign and strategies to develop the area.

It showed that 37.3 percent of respondents were willing to work in these regions and 37.5 percent would consider it.

Experts said that due to the current tough employment situation, graduates would find more opportunities there, possibly in key positions.

"Graduates in developed regions still have limited knowledge about western China. With the increase in preferential policies being carried out there, they will find good jobs as many leading enterprises expand into these regions," Ouyang said.

Wang Youhua, senior human resource director at Alibaba, said his company was committed to developing its network in western regions to connect local enterprises with millions of vendors at Taobao.

"In cooperation with the University of Electronic Sciences and Technology of China in Chengdu, Sichuan province, we have started training classes to satisfy the great demands of e-commerce professionals across the western regions," he said.

Job-seeking was still first activity for new graduates, with 55.4 percent of them looking for work straightaway. However, the figure was down from 88.7 percent in 2009. A total of 16.6 percent of the recently graduated chose to seek higher education and 10.7 percent of them elected to study abroad.

The number of graduates seeking higher education either domestically or abroad has grown over the past several years. Ouyang said in the face of an increasingly competitive job market, Chinese college students have adjusted their career plans, choosing to pursue higher education in a bid to improve their own abilities and make landing a job more easy afterward.

Eight percent of them will start their own businesses, down from 10 percent in 2003.

Hu Chao, from Lenovo, said: "We have noticed that Chinese college students have increasingly used more initiative in job hunting. Many of them have started doing internships during the summer or winter vacations. They are striving to grasp as many such opportunities as they can throughout their university studies."

Edward Lo said the survey was an opportunity for ChinaHR to help enterprises enrich their talent pools and also change the way people think about their work and career as new technology, tools and practices come into play.

The employment rate of Chinese college graduates in 2010 increased by 4.2 percentage points year-on-year, according to statistics released by the Ministry of Education.

As of July 1, a total of 4.56 million graduates had found jobs, accounting for 72.2 percent of the graduates this year.