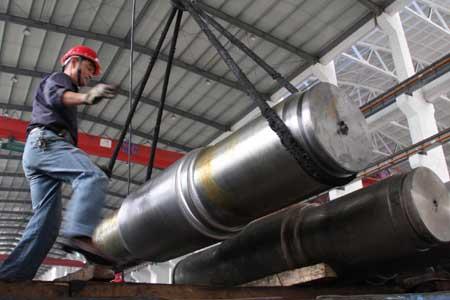 A worker checks product quality at a steel plant in Panzhihua, Sichuan province. By forcing steel mills to join hands, the Chinese government hopes they will be stronger force in talks with international miners. Xu Ruiping / for China Daily

Around 300m tons of capacity to close down in consolidation move

BEIJING - Around 300 million tons of excess production capacity will be cut from China's fragmented steel sector as consolidation forges ahead, industry experts said on Friday.

The State Council released a document on Thursday, saying steel projects built after 2005 will be closed.

"Although the document doesn't specify these projects, consolidation will be guided by principles such as regionalization, mutual complementarity and diversification, " he said.

The government also wants the nation's top 10 steelmakers to account for more than 60 percent of the country's total steel capacity by 2015, up from 44 percent in 2009, the document said.

The government will withhold approval for any new projects aiming to expand capacity by 2011.

It also proposed that the Ministry of Environmental Protection should strictly verify environmental assessments and local governments should not approve construction projects or provide land permits to industries with excess production capacity.

The document said the government would encourage domestic steelmakers to set up iron ore bases and establish plants overseas.

"This is the most comprehensive document on steel industry consolidation released this year, indicating the government's determination to rein in overcapacity and upgrade the sector," Xu said.

The document followed the government's announcement in April that small steel mills with blast furnaces of less than 400 cubic meters will cease production by the end of next year.

The central government issued a stimulus package for the steel industry in January 2009 which encourages big mills to merge with smaller rivals to create cohesive steel groups.

The industry has been facing oversupply problems, which weighed on steel prices and squeezed profit margins, said the China Iron and Steel Association.

The Chinese government has taken the these steps as a fragmented industry would find itself at a disadvantage in iron ore talks with the "Big Three" miners - Vale, BHP Billiton and Rio Tinto.

By forcing steel mills to join hands, the Chinese government hopes they will be stronger force in talks with international miners.

The latest step in industry consolidation came last month when Anshan Iron and Steel Group received approval from the State-owned Assets Supervision and Administration Commission to take over Pangang Group, based in Panzhihua, Sichuan province.