SHENZHEN - As an immigrant city, Shenzhen once boasted a galaxy of talents, but not now. As a result, it has drawn up new policies to regain its magnetism.

Starting in the mid-1980s there followed a decade or so in which, thanks to its flexible employment system, pioneering working environment, and a higher salary than most other mainland cities, Shenzhen was very attractive to skilled employees.

But as time passed by the city's lure faded. In recent years, many skilled workers have been frightened away by its high housing prices.

Wang Min, director of Shenzhen Human Resource Guarantee Bureau, recently confessed that "confronted with the pressure of high real estate prices, Shenzhen has lost its advantage in attracting talents and has fallen behind Beijing and Shanghai". 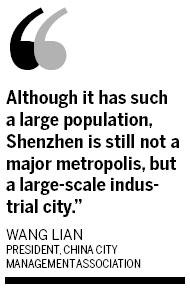 The city authorities recently announced a policy to attract high-end professionals and college graduates, many of whom have opted to work in other cities due to Shenzhen's high housing prices.

The policy offers a monthly housing subsidy of 1,000 yuan to holders of doctorates when renting accommodation in the city. Holders of master's degrees will get 500 yuan and those with bachelor's degrees will be entitled to 200 yuan.

A skills strategy is important for the development of the city, and this latest policy, when implemented, may help Shenzhen regain its appeal.

Analysts, however, do not think that the new policy will do enough to solve the housing problem and suggested the government should encourage the construction of a more diverse range of housing to ensure more people can own their own homes.

Shenzhen, as an immigrant city, has a registered population of just 2 million, but the actual figure is 14 million if the floating population is included.

"Although it has such a large population, Shenzhen is still not a major metropolis, but a large-scale industrial city," said Wang Lian, president of China City Management Association.

"Among the six administrative districts of Shenzhen, only Futian district is an urban district, while the others are industrial districts. Therefore, it is most urgent for Shenzhen to accelerate the city's development," he said.

To retain skilled employees, the government should allow local enterprises to build welfare housing on their own land, and those houses should be small and affordable, Wang suggested.

"If they want to buy a house, they have to rely on the savings of several generations and the family's future income," Qu said.

If housing prices remain high in Shenzhen, this will hamper economic development and badly affect its urban competitiveness, he added.