BEIJING: Chinese companies face climbing overdue payments in both length and amount despite the return to strong economic growth, signaling an increased probability of defaults or even bad debts, said a report from French credit-insurance provider Coface.

According to Coface's survey of 966 Chinese companies from October to December 2009, household electrical appliances, transportation, construction, agriculture, industrial machinery, steel and metals are the top six industries benefiting from a government stimulus package.

Yet these sectors, with the exceptions of agriculture and transportation, also include the highest numbers of companies reporting long overdue payments accounting for over 2 percent of total sales. 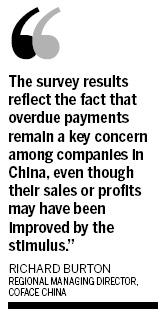 "Generally, more than 2 percent of total sales overdue is regarded as a dangerous level, whilst a payment that is overdue for over 12 months has a high probability of becoming a bad debt," said Richard Burton, regional managing director of Coface in China.

"The survey results reflect the fact that overdue payments remain a key concern among companies in China, even though their sales or profits may have been improved by the stimulus," he added.

The survey also reveals that companies in China face overdue payments with more average days overdue and greater weight in total domestic sales than in 2008. The number of respondents experiencing payments overdue for over 60 days has increased by 55 percent.

Meanwhile, 55 percent of respondents reported that payments of more than 2 percent of their domestic sales were overdue for six to 12 months, while about 24 percent reported such payments being overdue for more than 12 months - twice as many as in 2008.

Buyers' financial difficulties due to more fierce competition are the major reason behind such defaults, the survey showed.

"This may have arisen as companies respond to a sharp drop in foreign trade demand by shifting attention to the domestic market. As a result, domestic competition intensifies, leading to pricing pressure and lower profit margins," said Xavier Farcot, regional director of Risk and Claims for Coface in China.

In fact, companies in China are encountering a dilemma. Whilst facing increased overdue payments and defaults, they are forced to continue to offer more credit sales and longer credit terms, to secure their existing market share.