Snack maker's stock hot then not in Chinese IPO

Snack maker's stock hot then not in Chinese IPO 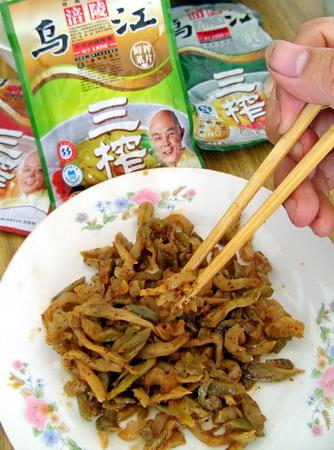 Fuling Zhacai enjoyed a tasty IPO, but the future is less certain. The share price of the Sichuan-based snack maker endured a roller coaster performance after its debut on the Shanghai A-share market last week. It rocketed by 191.6 percent to 40.8 yuan on its trading debut and then plummeted by the 10 percent trading limit for two consecutive days. [China Daily]

No investor would have expected a manufacturer of pickled mustard tubers to outperform the weak A-share market last week, running ahead of the blue chips and high-tech companies.

The share price of Chongqing Fuling Zhacai Group Co Ltd, the Sichuan-based snack maker soared 191.6 percent to 40.8 yuan on its trading debut and then nosedived by the 10 percent trading limit for two consecutive days.

The company caught the market by surprise as it now boasts a market value of 6.3 billion yuan with a price to earnings ratio of 78 even though the company's profit growth has stalled over the past three years.

Some investors even joked that the surge of Fuling Zhacai was pushed by the market expectation that rising inflation will help improve the growth prospects of the company as people will buy more basic necessities while food prices are spiraling upward.

Fuling Zhacai managed to raise a total of 524 million yuan by issuing 40 million shares in its initial public offering (IPO) on the small- and medium-sized enterprise board in Shenzhen.

But analysts said that the high valuation could not justify the company's performance. The company struggled to turn its operation into profit in 2000 by upgrading its production lines. Last year, it reported total revenue of 442 million yuan, up by only 1.5 percent from the previous year.

Analysts warned that a sharp fall in its share price was likely in the future as the high valuation of the company has defied economic logic by rising beyond the normal range.

"The stock price has clearly diverged from the fundamental value of the company," said Wen Lijun, an analyst at Nanjing Securities. "We expect the share to fall sharply before it returns to a reasonable valuation."

The roller-coaster ride of its share price also spurred concerns about China's speculation-plagued stock market despite the regulator's effort to rein in the irrational trading of new shares.

The Chinese stock market has been notorious for its speculative trading of IPO stocks, which has contributed to the sharp fluctuations of share prices on trading debuts. The regulator in recent years has adopted a series of measures to reform the IPO pricing and underwriting rules to reduce market volatility.

But the skyrocketing price of Fuling Zhacai's shares has already made the company's Chairman Zhou Binquan, who holds a stake of 17 percent, a multi-millionaire overnight.

Jiang Feng, an analyst at Eastmoney Information Co Ltd, said that small-cap stocks are often the targets of speculative capital, especially when the general market is weak.

"The market is overestimating the company's future performance and such a wild run of share price is not going to last," he said.