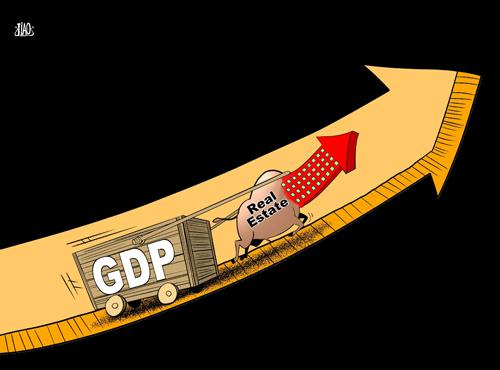 
This year's Spring Festival Gala offered plenty of "crosstalk." Performers poked fun at each other with silly faces and playful jokes. Comic sketches have a long tradition in China, yet today's younger audience wants contemporary entertainment. To please everyone, the Gala producers broadened the show with skits referencing popular social topics. Though lighthearted, they give insight into the spirit, and anxiety, of the times. One act touched on problems with China's property market. If they were not already, all seven hundred million viewers are now thinking about the issue. And it is serious.

The landscape of China is dotted with excess. On two hundred acres of farmland in Dongguan, a developer built the world's biggest mall, with room for fifteen hundred stores. Nearly all retail spaces are sitting empty. In Inner Mongolia, the city of Ordos spent 17 billion yuan developing a district to house a million people. China Daily dubbed the new area, with a population of barely thirty thousand, a "ghost city." Reports have surfaced from Haikou of home prices leaping 20 percent per month and luxury resorts popping up like spring daisies. Not only are mega-skyscrapers under construction in cities such as Shanghai and Jiangyin, many more are in the pipeline. Ironically perhaps, state-owned Citic just bought land to put up Beijing's tallest tower.

The central government admits that serious imbalances have arisen in the property sector. In some places the concern is too much demand, in others too much supply. A common cause is too much debt. Developers are borrowing to build, while purchasers are borrowing to buy. When money is too easy and cheap, supply can balloon and prices can skyrocket. Comparisons to Japan's asset bubble of the late 1980s are flawed, yet some basic lessons apply. Like China, Japan eased monetary policy to counter a slowdown in export volume. But the government allowed sustained surplus liquidity to propel a massive rise in asset prices, and a severe crash followed. Demographics alone position China far better than Japan for long-term growth, but they do not preclude a major, near-term property slump.