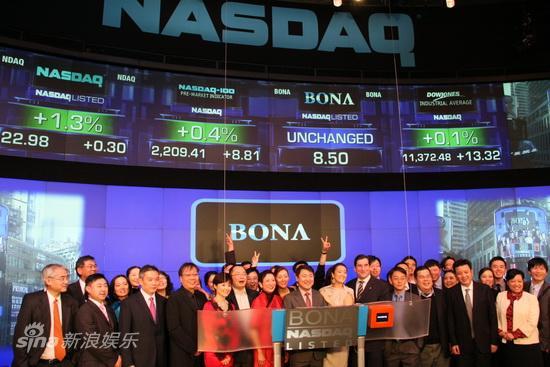 The Beijing-based company intends to allocate part of the proceeds - estimated at about $83.8 million - to new acquisitions, investments in film distribution rights and expanding in-house production capabilities.

The company will issue 11.74 million American depository shares at $7 to $9 each, according to its prospectus.

Bona Film reported a net income of $5.5 million in 2009. In the first nine months of this year, it doubled revenue to $35 million compared with the same period last year. But due to changes in the fair value of derivatives, the company had a net loss of $7.3 million.

Bona Film is one of six mainland companies listed in the US capital market this week. On Wednesday, share prices soared for online bookseller Dangdang Inc and online video company Youku.com Inc in their New York Stock Exchange IPO debut.

Youku.com's stock price closed at $33.44, a 161 percent hike from their $12.8 listing price, on their first day of trading on Wall Street - the strongest New York Stock Exchange debut in more than five years.

China has placed entertainment and media as one of the key industries for development in an effort to change its economic growth model and structure in the future.

One of Bona Film's competitors, Huayi Brothers Media Corp, a privately-owned film maker and now also a film distributor, listed on China's Growth Enterprise Board or ChiNext in November 2009. Its share price hiked 123 percent over its initial offering price of 28.58 yuan ($4.29) on the first trading day on the Shenzhen Stock Exchange.

While film distributors take a mere 2 to 7 percent of box office receipts, film production takes a whopping 40 percent, an analyst with Donghai Securities who preferred to remain anonymous, told the Global Times.