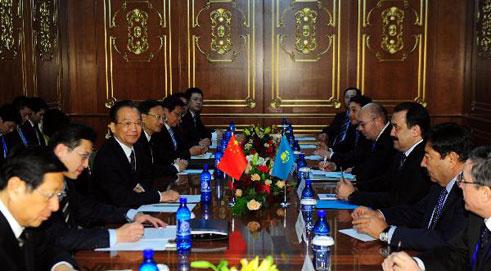 The pledge was made at a meeting between the two leaders, who are gathering in the Tajik capital for a prime ministers' meeting of the Shanghai Cooperation Organization (SCO).

The strategic partnership between China and Kazakhstan has enjoyed all-round and in-depth development in recent years, Wen said, citing frequent high-level bilateral contacts, increasing mutual political trust, close communication and coordination in such multilateral frameworks as the United Nations and the SCO between the two countries, and remarkable pragmatic bilateral cooperation.

China is ready to work with Kazakhstan to carry out the consensus reached earlier this year between their heads of state on the development of bilateral ties and advance their strategic cooperation to new heights, Wen said.

The two countries should continue to consolidate and expand their cooperation in energy and ensure the safe, stable and effective operation of the China-Kazakhstan oil and gas pipelines, he said.

He also urged the two sides to carry out some flagship projects in non-resources fields as soon as possible, enhance their cooperation in high-tech, infrastructure and agriculture, and make concerted efforts to build their transborder free trade zone.

The Chinese premier said that the SCO is an effective mechanism in promoting regional peace, stability and development and that China is willing to join hands with Kazakhstan and other SCO member states in strengthening the SCO and safeguarding their common interests in a better way.

For his part, Masimov congratulated China on its successful hosting of the Shanghai World Expo and the Guangzhou Asiad.

He said Kazakhstan and China have witnessed close high-level exchanges and contacts, succeeded in carrying out such major projects as the oil and gas pipelines linking the two countries, and conducted fruitful bilateral friendly cooperation.

Kazakhstan values its strategic partnership with China and would like to expand its cooperation with China in energy and such non-resources areas as infrastructure and agriculture, he said.

Kazakhstan is also willing to strengthen its communication, coordination and cooperation with China within the framework of the SCO in promoting regional peace, stability and development, Masimov said.