Nestl today strengthened its presence in Africa with the official opening of its first Shared Service Centre on the continent.

Nestl Business Services Africa, based in Accra, Ghana, is the fourth international centre Nestl has set up to provide financial and human resources services to its operating companies globally.

Nestl Business Services Africa will follow the successful model of Shared Service Centres in Brazil, the Philippines and Ukraine.

It will support Nestl in more than 40 African countries by completing activities such as employee payroll and invoice payments from one central location.

The centre is expected to employ 150 people by 2012. Nestl hopes to attract young local graduates for such jobs in partnership with local universities. They will have the opportunity to work and develop their skills in an international environment.

This is the second significant investment Nestl has recently made in Ghana, which is home to the company s Central and West Africa regional office.

In September 2010, Nestl announced it would invest CHF 36.2 million to double infant cereal production at its new factory in Tema. 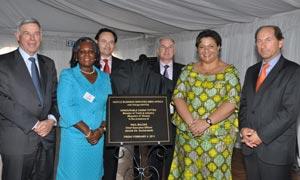 Nestl s Shared Service Centres are international units that run Financial and HR services in a standard and cost-effective way.

In September 2010, Nestl invested CHF 25 million over three years in a new centre in L viv, Ukraine to support more than 20 countries in Central and Eastern Europe.

While at the Philippines centre, 550 people support countries from Australia to Vietnam.
Related information:
L'viv Centre