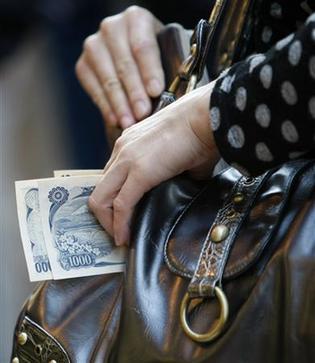 Designer boutiques in Tokyo are still packed with well-dressed young people, but these days, few of them carry shopping bags.

As Japan's economy heads toward recession and its stock market hovers around a 5-year-low, shoppers are closing their wallets, and the impact on European fashion houses has been dramatic.

From Louis Vuitton to Versace, brands are testing new strategies for the world's second-largest luxury goods market after the United States, such as wooing the super-wealthy or using Tokyo as a shopping mall for the rest of Asia.

But so far, no company appears to have found the magic formula to cure Japan's luxury malaise.

"Some of my friends really like to buy designer brands, but in general, brands are less important now," said Hiromi Takahashi, a 38-year-old office worker wearing a black top embellished with studs and sequins.

"We all talk about food prices, oil, the cost of living."

Takahashi was browsing through Jean-Paul Gaultier jackets and Alexander McQueen tops at Via Bus Stop, a boutique in Tokyo's sleek Midtown shopping mall. She did not plan to buy any of the clothes, preferring cheaper labels.

Around her, young couples and groups of women were toting small gift bags with accessories by mid-range brands -- affordable treats in the midst of a shrinking economy.

At the same time, prices are rising while wages are not. Core inflation was stuck at a decade-high 2.4 percent in August due to high fuel and raw material costs, but cash earnings actually slipped 0.3 year-on-year that month and household spending was down 4 percent.

No wonder consumer confidence hit a record low in September.

"It's not just luxury goods but also other clothes and eating out and cars and oil products, mainly because of the price rises," said Azusa Kato, chief economist at BNP Paribas.

She attributed the luxury goods slide especially to the decline in Tokyo's stock market, which hurt the middle class. The Nikkei share average has lost about 45 percent so far this year.