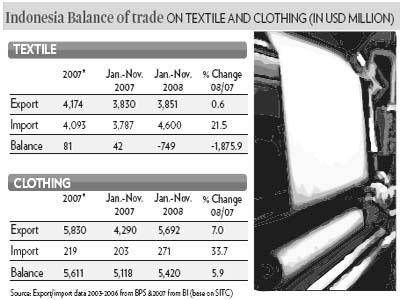 The textile sector may double its market share in Japan by 2010, helped by the Indonesia-Japan economic partnership agreement (EPA).

“Our exports to Japan in 2008 were around US$650 million, we hope that the value will increase to around $1 billion to $1.5 billion by the end of 2010,” Industry Ministry’s director general for metal, machinery, textile and miscellaneous industries, Ansari Bukhari said Monday.

He was speaking at a seminar on the Indonesia-Japan EPA.

The value of last year’s textile exports to Japan was about 7.8 percent higher than the one recorded in 2007, which was about $603 million.

As for the target for 2009, the industry targets exports to Japan will reach around $700 million.
The Indonesian Textile Association (API) hopes that the IJ-EPA, a free trade agreement between the two countries signed last year, will facilitate that Indonesia’s textile industry can achieve ambitious targets even during difficult times.

“We hope that with the IJ-EPA (in place), it will be easier for us to take a greater share of the Japanese market, now dominated by China,” API chairman Benny Soetrisno said.

Benny also hopes that with IJ-EPA the Japanese government can help Indonesian textile business owners to access credit to help fund capital expenditure on Japanese machinery and technology, especially as Japanese textile machinery exports declined by more than 25 percent last year due to the crisis.

“Japan needs to provide us with better payment schemes to rehabilitate our textile machinery. In return, Japan will be able to improve its machinery exports and prevent employee dismissals,” Benny said.

In common with Japanese industry, the textile industry in Indonesia faces a less than favorable period, but the IJ-EPA gives an advantage.

Industry Minister Fahmi Idris said textile exports would certainly decline overall during the crisis.
“It is very likely that the industry’s overall volume of exports will decline in 2009 because of the global crisis, but hopefully the value of exports will not fall below $8 billion.”

“Japan is the third largest importer of our textiles after the US and the EU countries. There will always be a need for clothing in four-season countries like Japan. We also believe we will still be able to export our products to (EU and US), but not as much as we used to,” Fahmi said.

It was felt the IJ-EPA, along with access to special credits, would favor greater exports to Japan even if exports to the EU and US might fall.

Fahmi said the government is also looking at new markets in the countries of the Middle-East region. “The crisis impact is not so severe in the oil rich countries,” he said.