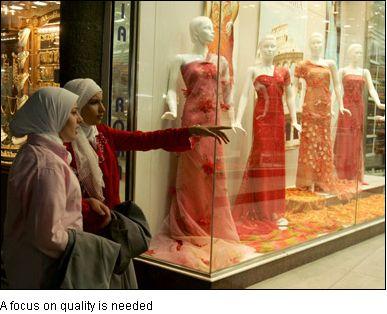 The government must do more to save Syria’s ailing textile industry which has been badly damaged by the global economic downturn, says a leading analyst.

The once-booming sector is struggling for survival in the tough financial climate, with workers laid off and factories closing. Aleppo, the unofficial capital of the Arab textiles industry, has been hit especially hard.

Dhafir Mahbak, an economics professor at the University of Aleppo, said the authorities must do more to help those working in fabric production.

“There is no crisis management in Syria. It is no surprise that the [textile] industry is struggling, but the government in Damascus acts like this is a complete surprise,” he said.

“We have a worldwide recession, decreasing demand for international products and intense competition from developed countries and others, such as India and China.”

According to Mahbak, the industry must become more competitive and needs support if it is to survive.

“We can’t compete because many of our laws make production costs too high,” he said. “We don’t support our industries like they do elsewhere.”

Syria exports most of its mid-and-high-quality textile products, including yarn, clothing, upholstery fabrics, rugs and carpets, to neighbouring countries, eastern and central Europe and former Soviet republics. A typical worker earns 4,000 lira (90 US dollars) each month.

But by the end of last year, 41 of the 300 textile plants in Aleppo shut their doors, leaving countless former workers with no unemployment compensation and few new prospects, according to Edwar Mkarbana, vice president of the Aleppo Chamber of Industry and a member of the Syrian People’s Assembly.

He said that while there was no official statistics on how many had lost jobs, he estimated the number to be in the thousands.

Mkarbana said the government in Damascus has been looking for ways to aid the ailing industry, which saw exports decrease by more than 50 per cent over the last year.

Last month, the industry ministry issued a decree that raised tariffs on cotton and various threads; imposed a minimum price on imported clothing; and established a board to develop and promote exports. The government has attempted similar initiatives recently in an effort to protect Syria’s other ailing industries, including fixing the price of fuel oil at 7,500 Syrian lira (163 dollars) per tonne.

But some Aleppo-based industrialists say that talk of a crisis in the textile production sector is overblown and dispute the official number of factories that have been closed down.

Malik Khudhayir, owner of the Khudhayir thread-dying factory in Aleppo, has his own theory about how to weather the current economic storm.

“As industrialists, we make a mistake by not thinking of ways to develop our factories around these current limitations,” he said.

“What preoccupies us is quantity rather than quality, but if we start to focus on quality, we can increase international demand.”

Meanwhile, the growing numbers of textile workers hit by redundancy are struggling to make ends meet.

“I lost my job and I have ten children to support,” said 50-year-old Omar Ghazwan, whose factory was shuttered last month.

“Every day, I await word that they will reopen my factory. Every day, nothing happens and I go to bed wondering how I will feed my children.”

The 40-year-old mother said she thought she’d found her dream job when she began working at a large textile factory in Aleppo.

Two months ago, she was let go and since then she said she has been forced to spend her days begging.

“Where else can I do?” she asked. “We do not have enough bread to eat and there are no other jobs now that everyone is closing factories and laying off more and more workers.”