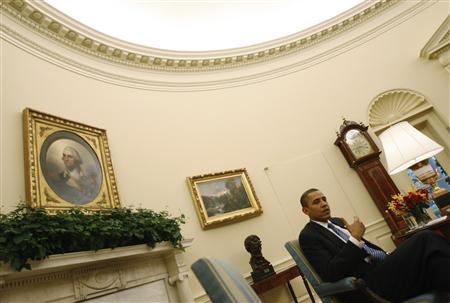 President Barack Obama answers questions during an interview with Reuters in the Oval Office at the White House in Washington, November 9, 2009.

WASHINGTON - President Barack Obama may be in for a nasty surprise when he reaches the final pages of the best-selling book Life of Pi, which he said on Monday he was reading with his 11-year-old daughter Malia.

In an interview with Reuters, Obama called it a "wonderful book" that was enthralling his daughter.

"There are whole chapters that really have to do with Hinduism, Christianity. There is a lot of philosophical stuff in there, but for some reason she (Malia) is hanging in there," he said.

The prize-winning book by Yann Martel centers on the journey of Pi Patel, who is cast adrift in a lifeboat with a tiger, a hyena, a zebra and an orangutan after a ship carrying him and his family from India to Canada sinks.

There is a battle for survival and eventually it is just Pi and the tiger left in the small boat.

But the fantasy adventure is revealed to possibly have been a fabrication by the narrator in the last pages of the book, with the real story emerging of a horrific tale of cannibalism and murder.