BEIJING To combat a surge in food prices that is worrying consumers and economists, China's government is reining in bank lending and selling down reserves of grain. But there is one driver of higher food prices that will be harder to get under control: the steady rise in the wages paid to workers on and off the farm.

The government has emphasized the role that temporary food shortages play. China's top Communist Party leadership, concluding their annual economic-policy conference Sunday, called for "doing everything possible to ensure the security of the supply of major agricultural products." But farmers know other factors are also at work.

Zhang Zhongliang, who runs a pig farm on the southern outskirts of Beijing, says the average pay for his workers has gone up 10% this year, to about 2,000 yuan a month, and he expects to give the same kind of raises next year.

"Wages are going up around the country. This will be the trend for the next few years," Mr. Zhang said.

Most of China's farmers supplement the income from their family plots by working at urban factories or large farms like Mr. Zhang's. With the job market bouncing back strongly from last year's downturn, the wages earned by rural households are up 18.7% so far this year on a per capita basis, according to official data.

Those rising wages are a "double-edged sword" because they affect both the supply and demand for food, said Scott Rozelle, a specialist on Chinese agriculture at Stanford University. Farmers who can earn more off the farm might abandon their fields for other jobs, or demand more for their produce.

At the same time, workers whose paychecks are rising can spend more on groceries and wedding banquets, increasing the consumption of food. Those effects will add up in coming years, as continued strong economic growth combines with a decrease in the number of young people entering the work force to keep pushing up wages in China.

"In the long run, we need to think about the implications of rising wages on food demand and supply," said Zhang Xiaobo, a scholar with the International Food Policy Research Institute in Washington. His surveys in the southwestern province of Guizhou have found some farmers are now giving up raising crops on hilly land that takes too much time to work.

It is a tricky question for China's government, which wants to raise incomes, particularly for rural workers. This year, local governments around the country have raised minimum wages, and have been told to make sure future increases stay ahead of inflation.

"We must use multiple channels to increase rural residents' income, by raising their vocational skills and income-generating ability," Premier Wen Jiabao said in October.

The higher production costs and increased demand brought by rising wages are now pushing up food prices by about 2% annually, said Huang Jikun, director of the Center for Chinese Agricultural Policy in Beijing, a trend he expects to continue in coming years.

"This counts as a pretty significant contribution to inflation over the long term," he said.

Headline inflation rates in China are already mainly driven by food, because manufacturers have been able to hold down the prices of many other goods. Over the past ten years, the food component of China's consumer-price index has risen an average of 5.2% a year, while clothing prices have fallen by an average of 1.5% a year.

China's manufacturers have been able to keep costs under control by investing in new equipment and boosting productivity. Economists say the key to offsetting inflation in food prices is finding similar ways to make agriculture more efficient. That isn't always easy: Most Chinese farms are small operations with several scattered plots of land, which makes it harder to put labor-saving equipment like tractors to use. 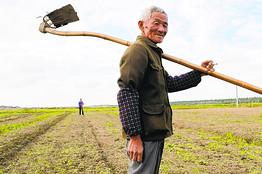 A farmer at an organic farm in Shanghai

As Mr. Huang notes, government policy is encouraging more leasing and exchange of farmland, so that enterprising farmers can stitch together bigger plots that are better suited to mechanization. And as part of its stimulus package, China's government also has been subsidizing purchases of agricultural machinery.

For Mr. Zhang, the pig farmer in Beijing, the focus these days is on machines rather than men. He hired about a dozen new workers over the past year to help increase the size of his herd to about 6,000 pigs, from 5,000 previously. But now he has put hiring plans on hold and is looking for new machinery to make slaughtering more efficient.

"We're not planning on expanding next year, but we will be buying more equipment. Our goal is to raise the level of our technology," he said.