CNOOC steps up search for oil as deadline looms

CNOOC steps up search for oil as deadline looms 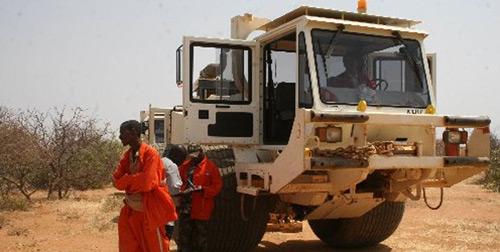 CNOOC has won several licences to explore on several blocks in Kenya.

A Chinese company undertaking oil and gas exploration activities in northern Kenya has intensified its search with just one kilometre set to be drilled, ahead of next month s deadline.
China National Offshore Oil Corporation (CNOOC) Africa has drilled over 4.5 kilometres of its Boghal-1 well in Kenya s Block 9.
This means that they have surpassed the secondary target of between 3.5-4 kilometres.
But the primary target to finish drilling is at 5.6 kilometres.
If it attains such depths, the Isiolo exploratory well is likely to produce commercially viable oil and gas deposits.
Geologists say only wells sunk up to four kilometres could show traces of oil or even gas deposits.
Kenya has stepped up the search for oil as it neighbour, Uganda, prepares to drill oil with hopes of being successful as its geology is almost the same as Uganda s.
The Boghal-1 well in Block 9 of the Anza Basin is the 32nd drilled in Kenya, which hopes to capitalise on growing interest in the continent due to high oil prices and increasing energy nationalism elsewhere in the region, said Mr Mwendia Nyaga, National Fossils Fuels Advisory Committee (NFFAC) secretary and National Oil Corporation of Kenya managing director.
A total of 23 out of the country s 36 blocks are currently leased, he said.
The exploration in Isiolo is, however, Kenya s first attempt to drill an on-shore oil well in 20 years.
CNOOC has won several licenses to explore on several blocks in Kenya.
This comes two years after the company signed a Production Sharing Contract (PSC) with the Government of Kenya to conduct an integrated geological study in several blocks.
The NFFAC is involved in exploration and negotiations for oil drilling contracts and is the custodian of Kenya s cash flow model, for PSCs.
The agreements are used in setting terms between companies seeking to explore for oil and the government.
Here, the government awards the execution of exploration and production activities to an oil company which bears the mineral and financial risk of the initiative and explores, develops and produces the field as required.