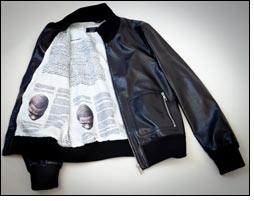 Gucci will partner with JAY-Z on the release of his first book, Decoded - the music icon s story of the hidden meanings behind his songs and his journey through the hip hop experience. The partnership is part of a collaboration between JAY-Z and Bing to expose every page of the book in a unique way before its official release on November 16, 2010.
The Bing interactive experience enables people to decode the 36 songs in the book with clues leading to locations, like Gucci, that have inspired JAY-Z s lyrics in Miami, New York, London, Las Vegas and Los Angeles. Clues will be distributed on JAY-Z s Facebook and Twitter pages, JAY-Z.com and Bing.
On November 11th Gucci will reveal one of three hundred Decoded pages in its 5th Avenue flagship store. The page is printed on the lining of a Gucci one-of-a-kind leather bomber jacket designed by Gucci Creative Director Frida Giannini in collaboration with JAY-Z.
Once the specially created bomber is discovered at Gucci, fans are instructed to text in a code found at the location and are encouraged to upload an image of the decoded page. Any player who locates a page online or in-person is entered into a draw to win the page they have located, signed by JAY-Z.