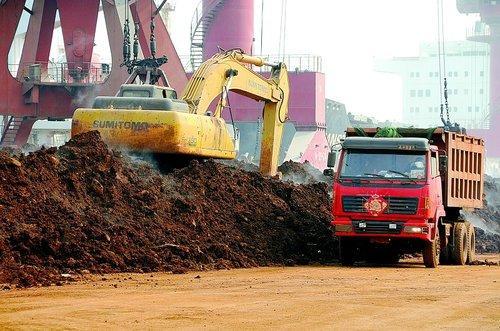 The prices of most rare earths have risen by three to five times this year since China began consolidating the industry.

Zhang Anwen, deputy secretary-general of the Chinese Society of Rare Earths, said that the "quite elevated" rare-earth prices helped producers earn billions of dollars, but the country will face a challenge meeting its energy conservation target.

"If one fifth of the lamps in China are equipped with energy-efficient bulbs, the country can save at least 100 billion kilowatt-hours of energy each year, equivalent to the annual energy output of the Three Gorges hydroelectric dam," Zhang said. "But because of high raw-material costs, downstream companies such as producers of energy-efficient bulbs have cut or halted production, which will greatly affect the country's targets for energy conservation and emissions reduction."

Rare earth is comprised of 17 metals used in applications such as high-performance magnets, light-emitting diode (LED) phosphors, and in high-tech products such as iPads and electric cars.

The price of fluorescent powder, which includes the rare-earth elements lanthanum and cerium and applied in energy-efficient LED light bulbs, rose from 300 yuan ($46.96) a kg in January to 2,500 yuan a kg in June, according to data from the online non-ferrous metals information provider Shanghai Metals Market (SMM).

Luo Tao, managing director of Hunan Corun New Energy Co Ltd, a battery producer for electrical vehicles, said if the prices of rare earths continue to increase, the battery industry will collapse and the country will face obstacles in developing electrical cars.

The country aims to have 1 million electrical cars by 2015.

The prices of most rare earths have risen by three to five times this year since China began consolidating the industry.

However, prices started easing in July. The price of rare-earth cerium oxide dropped by 20 percent after downstream companies reduced production.

A manager from Baotou Steel Rare-Earth Hi-Tech Co, who spoke on condition of anonymity, said the world's largest rare-earth producer, which controls 60 percent of the world's light rare-earth supply, has more than 10,000 tons of rare earth in stockpiles.

In earlier reports, Zhang Zhong, general manager of Baotou Steel Rare-Earth, said rare-earth prices will remain at high levels in the second half due to tight supply as the government kicks into action strict policies to encourage sustainable development of the overexploited industry.

He said that surging rare-earth prices will accelerate the reduction of low-value-added downstream companies and encourage high-tech development in the rare-earth industry.

From a long-term perspective, Zhang said these companies will either naturally fade away or move up the value chain.

A company executive from a rare-earth processing company in Ganzhou, who requested anonymity, said in Ningbo, Zhejiang province, half of the companies producing loudspeaker components, which use neodymium iron boron, have halted production.

"One third of downstream companies using neodymium iron boron have stopped production as the price of the rare earth skyrocketed," said Wei Chishan, an analyst with SMM.

China has been implementing strict measures on the valuable metals to protect them from being overexploited and undervalued.

The Ministry of Industry and Information Technology said last week that the ministry will join forces with five other ministries and state agencies to strengthen efforts against the illegal mining and smelting of rare earths.