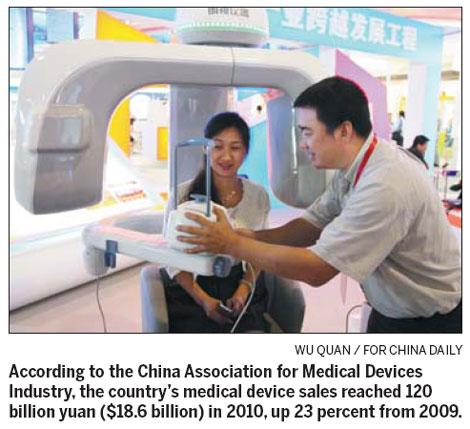 Multinational healthcare devices manufacturer Cook Medical Inc expects to almost triple its business in the Asia-Pacific region by 2015 on the back of continuing strong growth in China, according to the company's senior executives.

In 2010, Cook Medical generated $1.5 billion in sales revenue globally. Of that, the Asia-Pacific region contributed approximately 15 percent. However, the region accounted for about 40 percent of Cook's growth, according to the company.

"That was primarily due to strong growth in China and Japan, and it shows the importance of countries such as China to Cook's business," said Rebecca Liu, general manager of Cook Medical China. "We expect China sales revenue to surpass $40 million this year."

Nowell said the company is likely to almost triple its total business in the Asia-Pacific region by 2015.

"We predict China will overtake Australia to become Cook's second-largest market (in terms of sales) in the Asia-Pacific region following Japan by 2015," he said.

The country's medical device sales reached 120 billion yuan ($18.6 billion) in 2010, up 23 percent from the previous year, figures from the China Association for Medical Devices Industry showed.

The market is estimated to be worth $53.7 billion by 2015, according to business research and consulting firm Frost & Sullivan.

Last year, Cook Medical launched its Asia-Pacific Distribution Center (APDC) in Shanghai to meet the growing demand for medical equipment throughout the region.

"By placing the APDC in Shanghai, we believe we are well-placed to support the fast-growing Chinese market as well as take advantage of Shanghai's free-trade zone as a regional distribution hub," Nowell said.

"We understand some of our competitors have chosen Singapore as their distribution centers, but for us, we are very committed to China and establishing the APDC in China makes a lot of sense," he added.