Praise for the reconstruction achievements in earthquake-hit parts of Southwest China's Sichuan province echoed around an exhibition hall in the capital on Monday. 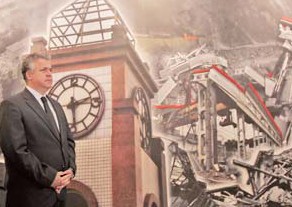 About 100 foreign ambassadors, ministers and representatives of international organizations as well as foreign reporters attended the display at the Military Museum of the Chinese People's Revolution on Monday.

The exhibition featured more than 300 pictures and 100 items telling the story of the devastation and reconstruction after an 8.0-magnitude earthquake in May 2008.

"China can always make the best from the worst. The reconstruction of the stricken areas show that clearly," said Lim Sung-nam, deputy head of mission from the embassy of the Republic of Korea.

The reconstruction projects are now almost complete in quake-stricken areas. Many towns have been relocated to safer places and some affected areas, such as Beichuan, the county hardest hit by the calamity, have been preserved as memorials.

"I went there in January and the survivors are now living much better than before. The newly built buildings and apartments are very beautiful," said Andres Unga, the Estonian ambassador to China. "Governments at different levels united the people and conducted this amazing reconstruction in three years. That teamwork is incredible."

"We were highly moved by the new cities, the good planning and the strong desire on the part of the governments and the people to play a big role during the reconstruction," she said.

Many countries and international organizations supported the reconstruction in Sichuan. An official from the Ministry of Foreign Affairs confirmed that almost all of the countries and organizations represented by the invited guests had donated or provided other services to China after the quake.

Ann Herbert, director of the International Labour Organization's Office for China and Mongolia, said they had conducted training courses for people who lost jobs.

"We also aimed to provide some protection for the children and women in the devastated areas, such as psychological support and more nutrition," Mellsop from the UNICEF added.

"We set up some child-friendly centers in 2008, but they were in makeshift tents then. Now, about 40 centers have been set up in permanent buildings in Sichuan province, which are operated by the local governments. We greatly appreciate the local government for its help for the kids."