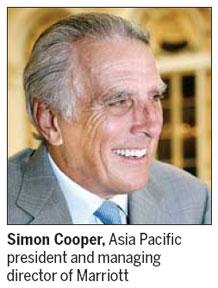 The hotel group will add 27 new hotels by the end of 2014 to make a total of 84 in China, Simon Cooper, Marriott's Asia Pacific president and managing director, said during his recent visit to Beijing.

Marriott's current presence on the Chinese mainland and in Hong Kong includes 57 hotels operating under six of its 20 US brands.

The group's confidence in the Chinese market comes from its current performance. Cooper cited their hotels in Beijing as an example of how hotels quickly recovered from the short slowdown after the Olympic Games in 2008, and it has been "amazing ever since".

"This is a good sign for the city," he said.

Asked whether there are more brands in the pipeline, Cooper said that although China is a big country with a lot of growth anticipated, they want to grow effectively.

"At the moment, we will stay with the six," he said.

Cooper said: "The biggest challenge is the pace of growth, which is certainly unique in the world. It's hard for someone from a different culture to come to terms with how quickly things are growing."

Marriott was asked several years ago to manage a hotel in the new business district in Guangzhou - the capital city of South China's Guangdong province - and Cooper said they had to envision what would be built on the flat fields in the next five years.

"The district authority had plans for a museum, a shopping center and an opera house. But there was nothing there at the time. It was unusual for us to come to terms with that. But when they say it is going to happen, it happens," he said.

Some cities - such as Chengdu, a powerhouse in southwest China - that were not on the hotelier's agenda five years ago, have jumped to the top position in its development plans, simply because of their tremendous industrial and financial growth.

"It is really interesting how we try to keep pace with the development and to have faith in the vision of all the new initiatives throughout China," he said.

Bearing in mind the surge of urban development, where the customers go is where the hotelier will position its next facility.

"We follow the customers," Cooper said, explaining that the crescent along the coast from the East down to the South, or 20 city clusters where about 90 percent of the country's GDP is generated, is where customers are willing to spend on quality hotel rooms.

Cooper said the group has been a longtime lobbyist for shortening the visa application period for Chinese travelers to the United States.

He said the charter flight in August to Hawaii arranged by Ctrip.com, the country's leading travel service website, will provide an easier opportunity for Chinese travelers to get visas.

The group is in discussions with Ctrip to promote Marriott hotels for Chinese travelers by providing specialized services, including news programs in Chinese languages at their hotels.

Because Chinese tourists prefer to do daytime activities inside, the group tries to put more facilities for them in their hotels, as well as outside for evening activities.

Cooper is also surprised by the number of Chinese visitors traveling in neighboring countries, with favored destinations including The Maldives, Vietnam, Japan and the US state of Hawaii. "The Chinese can make their own outbound destinations the same way American or Europeans make theirs," he said.