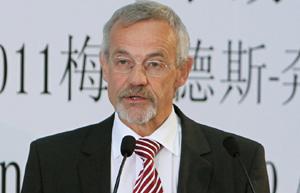 Ulrich Mellinghoff, head of safety development at Mercedes-Benz, said the company will further strengthen its research and development (R&D) capability in China by expanding its small, local R&D team to about 500 engineers.

"Customers in China know exactly what they want, and they won't accept an older-generation car. We always bring the latest technologies to the Chinese market," he said.

Aside from small differences to optimize the suspension, the E-class sedan assembled in the company's factory in Beijing is "absolutely the same car" as that produced in Germany, he said.

Sales of Mercedes-Benz, including the Smart, AMG and Maybach brands on the Chinese mainland hit 61,170 units in the first four months of 2011, up 77 percent from the previous year.

Safety is another key word the company stresses to attract affluent Chinese customers. China is the world's largest auto market, but its road safety is far from satisfactory.

The first quarter of 2011 saw a total of 41,691 road traffic accidents in China, which led to 12,354 people killed and 47,961 injured, according to traffic administration authorities.

To show its latest safety technology, Mercedes-Benz is running the "On the Road to Accident-Free Driving Safety Workshop" in Beijing this month, its second such workshop in the country.

"China is one of the largest markets for Mercedes-Benz. We will continue to offer more cutting-edge safety technologies to better meet our customers' needs," said Bjorn Hauber, executive vice-president for sales and marketing at Mercedes-Benz (China) Ltd.

In Beijing, everybody does what they want on the road, and while the car is part of the equation, things such as driver's education, emergency services and laws are also needed, he said.

The company started testing cars on China's roads five years ago with an accumulated distance of about 10 million km in 2010.

China has all kinds of driving conditions with its varying geography and climate and all the testing helped Mercedes-Benz optimize its cars, he said.

"What we learn here in China is also used for the rest of the world. We optimize our vehicles not only for China but also for all customers because similar problems may occur in other areas," he said.

The company plans to introduce its radar-based safety systems in China and is awaiting regulatory approval, Mellinghoff said.