The Great Wall of Gubeikou travels Beijing of China

The Great Wall of Gubeikou travels Beijing of China 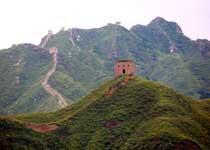 The Great Wall of Gubeikou lies in Gubeikou Town southeast China of Miyun county. The Great Wall and Simatai Great Wall of Longshan make up from poaching Tiger Mountain the Great Wall, curling. Protect ( 555) for six years on neat day in the north Build from the west river together Shaanxi elm forest river of today) Amount to the Great Wall for 1 500,000 Yu Mi to the Shanhai Pass. Among them, Gubeikou is the pass setting up defences especially. Two generations were once expanded this pass with gold, yuan. Reign of Ming Emperor Hongwu ( 1378) in 11 years Get up and add and build and turn off city, big or small juncture and beacon tower,etc. to shut in filling in facilities, and build the door and close 2 again, a door locates the pass of the Great Wall, claim the iron gate is closed ,Only hold and ride a truck to pass; A door is located on Chaohe River, claim the water valve is closed ,Store the site. The first year of an era of Longqing ( 1567) Qi begin to be right from the Shanhai Pass to Juyongguan Pass by JiGuang, Tan Lun See Juyongguan Pass and cloud platform) The Great Wall go on on a large scale to reconstruct,Gubeikou the Great Wall is construction. Wangjing floor is this section of peaks of the Great Wall, 986 meters above the sea level.
Fought and went on here in Gubeikou in 1933, more than 360 offices and men remains died in battle were buried in the same grave under the foot of the Great Wall of Gubeikou, build the offices and men tomb died in battle of Gubeikou. Lie at Tiger Mountain the Great Wall. Lie in the west village of river of Gubeikou Town of Miyun county, 665.2 meters above the sea level. Build eight years in reign of Ming Emperor Hongwu. The total length of city wall is 13.6 kilometers, set up more than 20 enemy s floors. Curl at the Great Wall of Longshan. Lie in Simatai Great Wall and lie among Tiger Mountain the Great Wall. Total length is 5 000 meters, set up 19 enemy s floors. General s floor and 24 buildings are the quintessence of the building. General s floor is located in and curled the commanding point of Longshan, it is the headquarter site, the building is shown in square, 10.1 meter wide, building north and south have 4 the intersection of arrow and window in all, things have 3 the intersection of arrow and window respectively, the east, the south, the west, all the north have 1 door; 24 holes of model of building are square, the double layers. Each every the intersection of surface and 3 the intersection of arrow and window, amount to 24 holes so name. But 24 buildings had already bombed and has lost half by Japan at present, not complete.
The Great Wall of the whole of Gubeikou has not been repaired manually, has a vicissitudes sense very much, broken city wall and play eyes, let people like place in times of flames of war raging everywhere that especially. In the setting sun, make people shed silent tears.