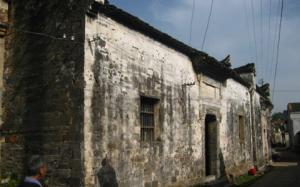 It is a provincial historic reservation unit that the east flows in the old street, send more than 300 buildings in emblem of Ming and Qing Dynasties. Annual have been weathered for a long time, has protected comparatively intact. Available to have the one that relatively concentrate on, keep the better one, the residence family with certain cultural inside information rebuilts developing in advance, build up a restaurant in the style of the ancients, embroider the building, teahouse, and pay attention to and chaining of chrysanthemum culture, it is sure to replenish that the government offers, thus fan out from point to area and drive the development of the whole old street, make the Chinese chrysanthemum city, regard Narathiwat shrine as the core to build five gardens in the most important thing ,Namely pottery park , five willow gardens , chrysanthemum garden , peach blossom garden , rural area of the garden ,The garden garden is deducted, the garden garden is interdependent, contrast finely with each other, make people linger on. The east flows in twin towers -Flow in the north and south of the town to the east of the county in the east, stand erect in two pagodas, call natural tower in the north ,Call peak tower of the show in the south .
The natural tower was established in the tenth year of Qianlong in Qing Dynasty (A.D. 1745) In spring March, lasts three years, the county magistrate Wan flows by the east and propose, the city person flows in the east the person believes the lady old the subsidy is built in week. Middle level Six Party of tower five, brick timber structure, 36.67 meters high, girth is 22 meters, there are six doors. Unless last eaves tower, last, academies natural tower ago,by have more militarily to walk by shrine, 26 words of room. The 18th year of Jiaqing in Qing Dynasty (1813) Zhou ShiXin s descendants shakes brothers third such as the column,etc. and rebuilds again in week in June, namely the extant pagoda. Beautiful peak tower and natural tower stand erect, on one side of Narathiwat shrine. More clear by the 24th year of Qianlong 1759 years) The punishment department department prison money city, bought and is built in the mountain region outside the beautiful mountain door. He thinks: Pulse which the county studies, release from and go through the mountain, little tall and straight tendencies. Although there are picture dragon s temples in the east, there are natural towers in the north, correct the lake pavilion of the money in the willow dyke, it is in love that the inner temple accuses of guiding. If the south closes it as studying Xun of the palace, stand erect one more in tower, bank up with earth and mend the gentle pivot, increase even more beautifully ,Thus come the name of. Five storeys of Six Party of tower, more than ten Zhangs high, the structure of bricks and stones, links with Narathiwat shrine, is like a colorful pen set of it, step on the tower to jump far, enjoy the beautiful scenery of the scene. It is classified as the unit for protection of cultural relics at county level that the east flowed in twin towers in 1983. It is a provincial unit for protection of cultural relics now.
Narathiwat shrine -Have another name called the pottery and pacify a shrine, in order to commemorate the Jin Dynasty acting pastoral poet Tao YuanMing builds. Lie and flow to the east of the county in the east on Niutou Mountain in the town. whether the east flow county annals year according to the intersection of Qing and Jiaqing, the east flow town is the intersection of Pengze and possession in the Jin Dynasty, Gong Tao let Peng Ze order, plant chrysanthemums herein. By noble character and sterling integrity,so say whether there aren t chrysanthemum city, river,it is build by shrine again not to continue. Narathiwat shrine has not done in the test in establishment time. Enlarge and cure for 3 years tomorrow 1490 years) Rebuild, Wan goes through in the first year of an era (1573) Pacify pottery in a shrine to move and build the stone river cliff of soft-shelled turtle outside the chrysanthemum Jiangmen, the two year of Shunzhi s rign in Qing Dynasty (1645) Move and build the present location in front of Yu Xiu s peak tower again. Historical relics office of Anhui Province in 1981 and allocating funds to rebuild to the cultural bureau in the county in the east. Narathiwat shrine cover an area of 366 square meters now, between the three shrine, the intersection of blue brick and little the intersection of tile and the intersection of one-storey house and building, the stall sets up the statue of Narathiwat, \\\ The loose chrysanthemum is still stored \\\ The horizontal inscribed board is hung high; The historical book, picture about Narathiwat are displayed in wing-room on both sides. Build the ancient tracery wall of ancient customs in front of the shrine all around, there is cobblestone one that led directly to the gate in the middle of the courtyard, the gate is inlaid for the first time Narathiwat shrine The stone volume, plant five willow, loose bamboo from side to side, the black tile of white wall, the bamboo is set off, peaceful and fresh. Cast the intersection of pottery and the intersection of deep pool and bright glass fibre reinforced plastic, look like on stall to in the east the intersection of county and cultural bureau 1993, support visitor look at with reverence. Announced for the provincial key unit for protection of cultural relics by the people s government of Anhui Province in June of 1981.