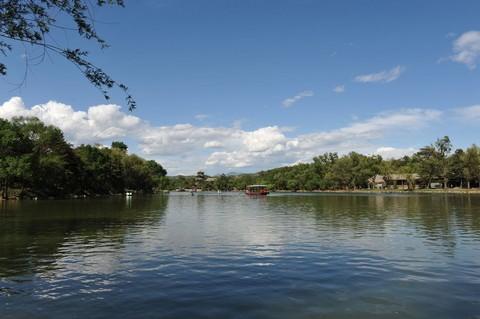 Chengde Mountain Resort (The Mountain Resort and its Outlying Temples, Chengde) Have another name called Chengde from palace or Rehe temporary dwelling place, lie in the north of Chengde city center of Hebei, the place that the emperor went to summer resort and dealt with the government affairs in summer in Qing Dynasty.

Summer Villa lies to the north of Chengde midtown, the military strong narrow and long valley of area of west bank of the river is on the ground, 230 kilometers from Beijing. It was established in 1703, went through Qing Dynasty s emperors of three generations: Kang Xi, Yong Zheng, Qianlong, build up in about 90 time consuming years.

Compared with Beijing Forbidden City, regard simple and simple and elegant mountain village rustic charm as the style in Summer Villa, fetch the true quality of the natural mountains and rivers, absorb the scene in the north of the Great Wall of the South, become the extant occupation of land largest ancient emperor s palace garden of China.

The lake district is in the north of the district of the palace, the lake area including state island accounts for 43 hectares, there are 8 small islands, cut the lake surface apart into the area of different size, well arranged, the continent island is straggly, with rippling surface, rich in the characteristic in the land of plenty of the South.

There is clear spring, namely famous spring of Rehe in the northeast corner. At the foot of the hill in the north of lake region, district of plain, terrain widen, have the intersection of tree and garden Wan and try on to Ma Dai, a stretch of green grasses are green, the forest is luxuriant, boundless and indistinct grassland scene.

The chain of mountains district is in the northwestern part of the mountain villa, the area accounts for 4/5 of the whole garden, hills are undulating here, the gully is vertical-horizontal, the numerous floor hall palaces, temples are interspersed among them. Many water of southeast China of the whole mountain villa, many mountains in the Northwest, it is the epitome of China s natural ground form.