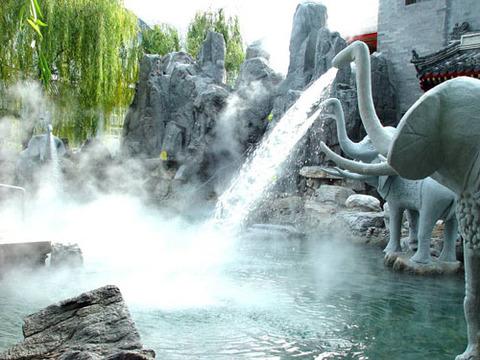 Juan irritated to subdue complicated cases, lead with disease solving tired while being getting happy.

The pearl bears the famous historical site, need not praise in fragrant four seasons beyond the Great Wall.

Near Chengde, the hot spring wins more, but this place of head ditch of Chengde county by whom the emperor favored and opened up for the royal temporary dwelling place in Qing Dynasty. In the soup spring village in the town of head ditch only 44 kilometers from Chengde urban area, there is spring temporary dwelling place of soup of Qing Dynasty, established in the 45th year of Kangxi in Qing Dynasty A.D. 1706) ,Still store main hall, hall on the door, soup pool, imperial stone tablet, rockery and enclosure now.

The intersection of Kang Xi and Emperor find soup mountain hot spring the 31st year of Kangxi for the first time A.D. 1692) . He enter after the bath, think \, ink of hot spring, Softer and warmer, should be on the body \ ,Then prepare to build the temporary dwelling place. The 45th year of Kangxi ( 1706 years) ,Summer Villa of Chengde has already begun to take shape, the soup spring temporary dwelling place is built formally.

Because of Buddha Wang s temple of original dragon, maintain every hall, builds the temporary dwelling place on the hillside behind the temple. That is to say Kang Xi said in the tablet in the article, \ Entangle it with the week wall, construct several rafters of temporary dwelling place, it is the place where the summer resort Sue bathes in.

\ The 55th year of Kangxi ( 1716 years) ,The holy grandfather profound Ye has written a tablet inscription of Buddha Wang s temple of mountain dragon of imperial soup in person. The spring the soup of the tablet inscription is praised extremely to the limit: \ Test the intersection of soup and spring, write on person who spreads history, Li the intersection of mountain and it run after fame mark most, sporadically appear also while being other Yu Shan pass the magazine, and the spring is particularly efficacious and different now.

There are rockery, veranda,etc. around Gong She. According to the seventh year of Qianlong 1742 years) A memorial to the throne of the Palestinian picture of person in over-all charge of Rehe reveals, \ The large cellule of temporary dwelling place of spring of soup is connected with 187 \ of veranda .

There are hall on doors, main hall, total pool of soup spring, rockery and enclosure to retain the ancient building so far.