Close the mountain and travel eight times Qingdao of China

Close the mountain and travel eight times Qingdao of China 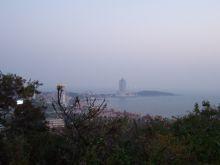 The city can take Bus No.s 15, 219, 302 under small West Lake station in the west of Zhongshan Park, turn west enter red the intersection of island and way, first crossroad to imprison the mountain 8 times.

Close the mountain and lie in the north of Xiaoyu Mount, the east of Qingdao Marine University eight times. In the second of the 20th century, the thirties, here was once the place where the famous writer gathers in history of a batch of Modern Chinese Literature.
Close the mountain angle of the mountain, a small building of two storeys at the crossroad eight in the big deep former residence. Enter courtyard through the stone steps, and then could enter the room through the stone steps. The film peach blossom after robbing starring queen Hu Die is that the big deep gentleman was created, this the intersection of China and first the intersection of film and the intersection of literature and drama, regard Qingdao as original version, write on. People have already gone in former times, the mark is full of stains or spots that the lock has already become rusty too. A generation of literature master Ba Jin says: 1932, I come dormitory of Qingdao at the one the intersection of friend and mountain, create love and write the preface for sand man in here. He mentioned The mountain Close the mountain eight times, the friend s dormitory is Shen CongWen s former residence. Shen adjacent to big deep former residence from gentle former residence, first 2 little floor too, have a courtyard ago, plant all over flowers and plants. Shen CongWen is in masterpieces such as here creating from the gentle autobiography , writing Ding Ling , eight fine horses picture ,etc., ferment here too in border town .
In the east of the marine campus of China, 68 meters above the sea level. In 1924, private Qingdao university was established, closed down in 1929, newly-built state-run Qingdao university on the old site in 1930, renamed as state-run Shandong University in 1932, the war of resistance resumed classes after winning in 1946. Leave Shen from gentle big dark, Liang Shiqiu famous footprint of writer on the the intersection of Modern Chinese Literature and history in here will it be 20- 30 times the 20th century. It is their life, place that works, creates to close the mountain eight times around.