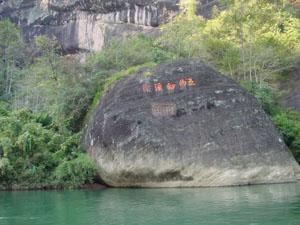 Also called Wen Feng, it is one of the 36 peaks of mountain of Wuyi, the south bank located in nine five small streams, face the small stream and stand, a towering stone. The body bush of rock grows thickly, green bamboo is set off, mount the rock to carry, bow and look at zigzagly, only see the clear small stream swirl, the bamboo raft competes and flows.

The ancient inscribes saying in the rock wall: other deep blue wave of generation ,All peaks of Wuyi that and look into the distance in ring, can nearly all include the optical fundus. Clear people respectful to say in Zheng: Look into the distance, form a cluster beautiful very, it is the intersection of Sri Lankan and platform that win even.

Prince Wei Qian changes one s clothes here after 13 celestial beings take a shower in nine small streams according to legend, then get on the adjoining Tianzhu peak directly floating in the air and die and leave straight. The intersection of writer and verse that say Liu chant Yuan Dynasty: Smell, have groups of celestial being, the intersection of bath and deserted ink together former times.

Straight thousands of ren of hillocks, the rosy clouds cover their body. Also want to slough off the clothing of dirt, Yi s celestial sleeve floating in the air. Have on the rock Change one s clothes in the platform , big day one of jade emperor Wait for the inscriptions on precipices. Change one s clothes platform to be very ancient to have the intersection of elder brother and the intersection of stone and the intersection of mountain and room, bright Wan Wuyi scholar of mountain blue to moisten the color to construct over the years, present mother with respect and occupy, obsolete