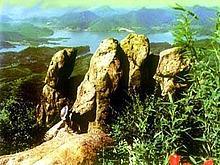 Spread out celestial mountain, lie in an area 5 kilometers north of city, legend take the place of, prolong flat people spread out guest, make pills of immortality celestial being in a group here the Jin Dynasty. Gorge stand towering like a mountain one high meter of the intersection of stone and Buddha that likes nature itself at the rock wall, so have another name called the stone Foshan.
Legend take the place of the intersection of Nan Ping and people, spread out guest, make pills of immortality celestial being here the Jin Dynasty, so have another name called and spread out the celestial mountain. The hill overlaps here, the different cave of high and steep rock, the grass green forest is green, the luxuriant flower of bamboo is fragrant, ravine spring ding-dong, the rays of sunlight are pleasant. Meet the eye on every side grassy green in the bajiao banana forest that extends several hectometres on both sides of the gorge, the ocean like green, the fresh breeze has been stroked, swing one layer of wave, make people enchanted. Obey doctorate, jade tablet poem cloud Liu, minister of Ministry of worker, tomorrow: Spread out green a thousand ren in the hillfoot, fine rosy clouds draw near the sunlight. The gentle silk of nature s mystery is rotten, easy to mend Shun s clothes.
Gorge stand towering like a mountain first the intersection of stone and Buddha that like nature itself at the rock wall, wear kasayas, overlook slightly, god has the shape concurrently, about 15 meters high, magnificent, wonderful workmanship excelling nature. Ancient cloud: the stone Buddhism impersonal force can be ,This is a symbolic sign of the stone Foshan. On the back mountain peak, Buddhism that another one is natural to sit. Have Song Jiading 15 years in the mountain 1222 years) South the intersection of sword and state know thing, state of army, Know the state) Chen Mi (word replies the room, the people in Pu field) The inscriptions on precipices written, about 200 words, praise in the article there are clear spring, white stone, cloud precipice, all scenes of candle peak,etc. here highly, can swing all scenes to compare with Mount Lushan, Wuyi, balcony, wild goose. By there is Buddha lotus flower there are your location on the institutes. There are mere holes of a Buddha in the side of mountain stream, 60 meters deep, it is about 2 meters high and wide. There is a little vulture peak by stone Buddhism rock, there were poems that praised in the shape such as vulture s bird, poet Zeng ZiFang in Song Dynasty: In front of that nobody know in mountain,little vulture peak sudden when making.
Here not only the scenery is pleasant, waterfall group of force seven is but also called a special skill. First class first grade such as flying dragon waterfall, white dragon waterfall, one pair of dragons waterfall, fairy maiden waterfall, waterfall of elderly person for whom a birthday celebration is being held, towering waterfall and fairy maiden waterfall are rushed down and laid, gush out the pearl and spatter the jade, impressive, staggering. The puddle with rippling surface under the waterfall one by one, the heaviest puddle, it is 50 meters long, 10 meters deep, go boating into it, interesting.
Stone Foshan Forest Park has an area of 164 hectares, ecological environmental protection is perfect. Forest dense on the mountain, species abundant, country rare to it lays special stress on protecting plants to be as follows, while being endangered Thorn sand Luo that first grade protected; Second ginkgo, clock calyx wood, umbrella flowers and trees, Chinese yew, Hubei Province, Fujian camellia,etc. protected; The ones that protected sank water camphor tree, silver clock tree, Phoebe nanmu of Fujian, half a Chinese sweet gum to carry on one s shoulder or back etc..