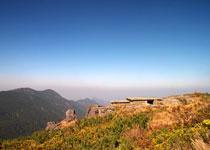 Wuyi Huanggang Mountain Huanggang mountain, be lasted intersection,Wuyi mountain in nature reserve, lie between north latitude 54 of 33-27 degrees of 27 degrees, between 117 degrees 27-117 degrees of 51 of east longitude. The highest peak has an elevation of 2158 meters, it is a southeast peak of continent, it is Gao Shanfeng the most of the whole East China areas of cities of six provinces one, known as Roof of East China Fujian Tibet Tian Mountain of Nan Ping pillar of Wuyi peak of Jiangxi .
Huang GangShan ( Mountain of Huanggang) It is a mountain of Jiangxi two provincial boundaries of Fujian, erect two provincial boundaries stones on the mountaintop, 2158 meters of lofty perches lie within the boundaries of Fujian. About 40 kilometers from the urban area of mountain of Nan Ping Wuyi, about 60 kilometers from Shangrao Qianshan County. Because mountaintop born the all over tawny daylilies Commonly called as the day lily) Bloom in season in eight Septembers, the hillock, all over dyeing golden, thus come the name of Huang GangShan (the mountain of Huanggang) . 1979, until intact DiLie Lin the intersection of Wuyi and the intersection of mountain and natural district around the yellow hillock country, it is the earth and only biodiversity oasis on a latitude, its value is precious.
Huanggang Mountain terrain level with a wide gap, among a small circle one that is in 556.7 of area, have an elevation of 300 meters the most low, have an elevation of 2158 meters at most, form long taking the table vertically of ten kilometers,
The foot of the hill of mountain of Huanggang of Wuyi is an evergreen broad leaf forest belt; With the sharp increase above sea level, loose on Mount Huang, warm varieties of trees such as the southern Chinese hemlock spruce,etc. increase, forest the intersection of vegetation and type transfer by the evergreen foliage forest to a broad leaf of stitch and mix and pay the forest belt; As reaching about 1900 meters above the sea level, the sight is wide and bright suddenly, spread all over southern Chinese hemlock spruces and loose conifer leaf forest belts that forms of Mount Huang; Continue it up, low evergreen and deciduous varieties of trees, form short song forest belt of Zhongshan; The mountaintop gentle slope, a standing grain grass is brought for the grassy marshland of Zhongshan of the main fact. From low and above sea level to being high and above sea level, 5 the intersection of forest and vegetation lead demarcation line to be clearly demarcated, reflect temperature, precipitation, taking the table vertically at different height above sea level of soil too.
The whole area in the scenic spot is 539.35 sq. km., seven star mountains with the moving legend in the scenic spot, looking at mountain, mountain range, Buddhist of beating a drum to fit temple and control thrust stone, have getting red the intersection of tourist spot and east the intersection of hole and the intersection of rebellion and site and the intersection of stone and the intersection of ridge and the intersection of village and the intersection of Soviet and site,etc. of Wang. Keep the comparatively intact, more primitive area in forest view of the centre of middle subtropical zone of China, had abundant travel water areas resources at the same time, formed the eco-tour scenic spot with abundant numerous in variety content, praised as the rare plant kingdom, the strange birds different beast s paradise .