Officials with the Chongqing Municipal government said on Tuesday that the business management of Wal-Mart may be "problematic" after 13 Wal-Mart stores in the city were closed temporarily and fined over a case of product mislabeling. 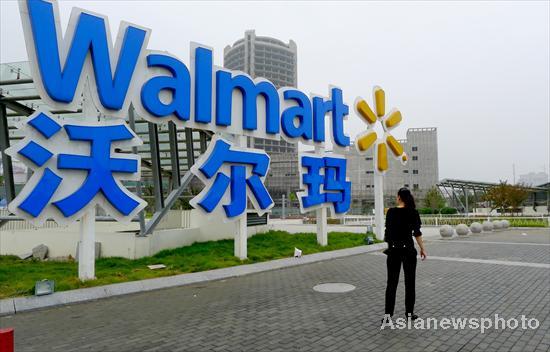 Pedestrian walks past a Wal-Mart signboard on Sept 29, 2011, in Xuzhou, Jiangsu province. [Photo/Asianewsphoto]

The local government ordered the stores to close for 15 days and fined the company 2.69 million yuan ($421,894.58) after the stores were found to be selling ordinary pork labelled as organic pork, the Chongqing Administration of Industry and Commerce said on Sunday.

"It is not an isolated case, but a reflection of the company's dysfunctional management mechanism," said Zuo Yong, an administration official in charge of supervision and management of food distribution.

"The Wal-Mart stores in Chongqing have once and again violated laws and regulations and infringed upon the rights of consumers," Zuo said.

In March, Wal-Mart was fined after it was found to be selling expired duck meat in a store in Chongqing. The company has been punished by the local government 21 times since 2006 for exaggerated advertising and selling expired and substandard food.

Zuo said the problems indicate that the company is prioritizing economic benefit instead of the interests of consumers.

Tang Chuan, a law enforcement official from the Chongqing Administration of Industry and Commerce, said government supervision has often been ignored by Wal-Mart.

"The company was quick to apologize after the incidents happened, but it has not made efforts to improve its management in accordance," Tang said.

Some analysts said the government's lax supervision of foreign companies is also to blame, arguing that some laws and regulations have not been effectively enforced by relevant government departments and that punishments for violators are sometimes too light to have a deterrent effect.

Analysts said that some local governments have set less stringent supervision standards for foreign companies than for Chinese-owned companies in order to attract more foreign investments.

Tang said that the cost of breaking the law is too low for foreign companies.

"Comparing to the amount they've earned, the fines are an extremely small amount of money," Tang said.

The Chongqing municipal government started a campaign this year to crack down on food safety violators. The local government has shut down 91 companies and revoked 602 production licenses during the campaign so far.