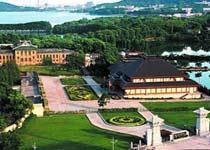 The free open ancient Chinese chime with 12 bells is played regularly: 15 yuan for each person, perform for 20 minutes each time; 11 of morning of every day: 16 for 00 and the afternoon: 00 once respectivelies.

Hubei museum was established in 1953, it was historical relic collection and research institution of the focal point the most of the whole province, lie in No. No. 88 of East Lake of Wuchang district, Wuhan of Hubei.
The intersection of collection and total number reach 140,000 component more than at present, first class the intersection of product and 645 among them, 16 of national level. And various in style, the category is admired completely, plainly by Chinese and foreign appreciators and visitors.
There are four present main display of Hubei museum: Until whether second tomb unearthed relics Hou display once . Show up to county in Hubei 1978 Market of Suizhou of today) The Warring States that explore once second tomb unearthed essential part historical relic, monarch of country, in early period. This grave dates back to more than 2400 years, excavate ten thousands of many kinds of historical relics. Its quantity is big, the amount of kind, value is high, ones that kept are good, the sensation is home and abroad. Display and divide the drawing room, bronze ware, weapon, car and horse holding a memorial ceremony for device, bamboo slip, painting the wooden furniture, gold and jade device and eight major parts of musical instrument, exhibit 360 most representative historical relics together. Among them, model wonderful setting up craning, the intersection of husbands of two sisters and old pot, of set, ancient bronze mirror Zhyuan by the intersection of craft and exquisiteness, the intersection of line and the intersection of decorations and nobly bronze deerhorn; Still very sharp the intersection of dagger-axe and halberd and triangular the intersection of sword and Shu of shape much so far; Forgive a lot of written historical materials, the intersection of China and most early bamboo slip; Special Daikin one which weigh up to 2156 grams; It makes ways and styles to be different on clear, the intersection of paint and wooden bamboo article,etc. of Qin, rare treasure under archaeology. Especially a set of bronze ancient Chinese chimes with 12 bells in the musical instrument exhibit, it is the priceless treasure even more. Of great compass, the sound is graceful, can play various Chinese and foreign melodies, is praised as a great miracle in the music history of the world. Two is ancient music historical relic exhibition of Hubei . Show except second the intersection of tomb and musical instrument Hou once, have the intersection of the whole province and different era, different kinds of old the intersection of music and the intersection of historical relic and more than 40 that all parts explore and gather over the years. In the exhibit, have the intersection of distance and today remaining years Wan, primitive the intersection of percussion instrument and yellow, loud, etc black pottery of the Neolithic Age, it is made up etc. that it is happy also paint-coated stone in unique the State of Chu arranges the huge rock, tiger seat bird a drum, law managing and skill of the Tang Dynasty, have reflected China s ancient magnificent music culture achievement. Three is handicraft exhibition of palace of Qing Dynasty . Show the fifties the intersection of Beijing s Imperial Palace and museum appropriate the intersection of Hubei and Provincial Museum, store on the intersection of the Palace Museum and treasure accumulating gathering up and other more than 80 very precious handicrafts of hall originally. On behalf of traditional handicraft porcelain, jade ware in China, paint the first-class levels of the wood, carving skill. Constant change of sky above Hubei and Hunan special display of a century that four is . With over 200 typical historical relics, historical datas, pictures, pass this side of Hubei of hinterland of motherland, show the numerous kind and upright men in China, set up the extremely hard and bitter struggle carried on among over one hundred years from the Opium War (1840-1842) to new China. This hall has already collected all kinds of more than 90,000 historical relics, samples now. The collection, and collection of all parts that the overwhelming majority comes from the archaeology and explores, have strong, distinct local colour.
The intersection of Jiangling and clear tomb excavate Wang Gou Jian bronze sword, Wu WangFu bad bronze lance and paint-coated the intersection of wood carving and the intersection of bird and the intersection of pedestal and screen in the museum, charter the State of Chu excavated in Shandong University tomb in Jingmen Betrothal gifts competent to meet, pursue Lacquer painting and judicial document bamboo slip of the State of Chu, go to bed in Yunmeng the tiger produces the legal document bamboo slip of Qin Dynasty had, and the celadon faces upward and covers lotus flower one,etc. in the Southern Dynasties when hall of land of Wuchang is unearthed, there are extremely high history, science, artistic value; And for example, four years (608) for Sui DaYe Dunhuang text,Ming and Qing Dynasties book be summer sent Wu not to be big to be lasted master river, the four doors Wu Shen Zhou, document solicit bright, Qiu Ying, sends Dong QiChang, Chen JiRu, eight mountain persons in Songjiang The bright red is big-eared, eight oddballs in Yangzhou Jin Nong, Zheng Xie, yellow and careful and a ink marks of abundant encouraging, Yang ShouJing,etc. all families, belong to the rare treasure. Such as the army flag of 18 stars at the time of the first rise in revolt of the 1911 Revolution Wuchang, relics, souvenirs of famous revolutionary martyr and revolutionary leader Yun DaiYing, Chen TanQiu, Shi Yang, Mao Zedong, Liu Shaoqi, Chou En-lai, Dong BiWu,et al., it is valued highly that unusually rare.