Travel in Chunxiao of Land of Peach Blossoms Taizhou of China

Travel in Chunxiao of Land of Peach Blossoms Taizhou of China 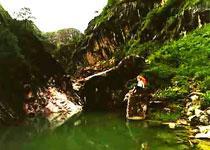 Lie in Land of Peach Blossoms hole of 13 kilometers in the northwest of the county town of Zhejiang Province balcony, the area of scenic spot is 3 sq. km.. Land of Peach Blossoms is the place where one are rich in magical color, county peasant Liu Chen, Ruan Zhao of Shan come here to gather medicinal herbs in the Eastern Han Dynasty, lost to give up the food, pluck peaches and allay hunger, meet two fairy maidens by the peach and small stream, together with to the cave-dwelling, get married. Take pleasure in playing chess on ordinary days. Homesick and anxious half a year later, two women saw Xikou off, returned home and saw suddenly, had already gone through for seven generations unexpectedly. Later on two people came to the mountain once again, repaired to celestial Heaven at last. The story, start, see on the Southern Dynasties deep and remote to record tomorrow of YiQing Liu, king of Linchuan. As one to some extent, and then through Fu Yi, spread out it as the celestial the beginning.
Land of Peach Blossoms hole is a deep and high mountain valley, the peach and small stream are up to the mountain twists, the cliff of two sides is uneven, if display one the intersection of fan and beautiful painted screen, mirror the intersection of pool and the intersection of curtain and waterfall reflect, bring during that time, wade eye, succeed, award. Poet Yuan Mei wrote five point one steps peak rotated, ten point one steps peak changed as Qing Dynasty; The very heavy shape of natural moat, the screens. Spirit mere fruit, from shut, blue and green and red and dimly visible hurriedly. It follow by small stream but at,unfold water such as lake crape, spring there aren t ringlike jade worn as a pendant at the waist the sounds, lingering musical sound Qingyuan. County magistrate Zheng invite the intersection of colleague and bachelor visit rest, give it blow one sweet-smelling name to rich in poesy to dish Northern Song Dynasty, call jade ravine of ring . The east of the ravine, the peach blossom bursts into gorgeous bloom, fall and drift slightly red, call depressed place of peach blossom ,It is the place where Liu, Ruan die as celestial being according to legend.
Turn over a pool and congeal the green one Fairy maiden s bath tub ,It is that the rock is innumerable to head on The old dragon sprays water With swallow s tail waterfall. Show the south peak The mountain Shape stone, right is vertical to resemble the fairy maiden strikingly to stroke the sleeve, drive the cloud and step on the fog elegantly and want to leave, this is fairy maiden stone .