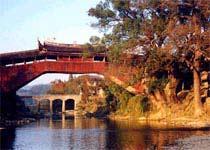 The north ravine bridge, the stoplog type wood joins the shelter bridge, lie in the town of small stream of Si to play the bridge village. Established in the 13th year of Kangxi in Qing Dynasty (1674) ,(1803) in the eighth year of Jiaqing Build, (1849) in a mere 29 years Rebuilding. The bridge is 51.7 meters long, 5.37 meters wide, clear span is 29 meters. The whole structure of north ravine bridge spanned above the north small stream is rational, powerful, the red body of grey tile of bridge room, the eaves beast flies, the ancient tree is set off by the bridge, two water crosses under the bridge. Green hill, green water, Hongqiao, ancient tree, reflect each other, form a pleasant landscape painting.
The north ravine bridge was built in and visited place of about 50 meters at the bridge now originally, still stored the old bridge site now; It was the flat shelter bridge of wood that year. There are three rocks under the bridge, the villagers say that is three tortoises, defend water mouth of the village. After the level bridge is destroyed, the clansman reconstructs the wooden arch bridge (the north ravine bridge of namely now) in the low reaches ,First thing RuChang, YouQing and the intersection of monk and the intersection of bright lamp and 3 Lin Chen.
Why destroy about the original flat shelter bridge of wood, among them there is a legend story. One day 400 years ago, there are two much-travelled celestial old men, passed by the north ravine bridge of small stream of Si, see here with green hills and clear waters, the view is good, two persons accommodate the chess board on the bridge, award the scene, move. For a moment, an old woman was called knowing the child of week taking one, wanted the bridge, she says to two celestial old men: Invite two the intersection of guest and competent pieces of convenience, let I and know, pass bridge week! Two celestial old men hear those seven eight -year-old children call knowing the state (week) ,Feel laughable, put down the piece and stand up. A celestial old man has read a poem smoothly: 80 mother-in-laws do not know to be shy, the little child runs and knows the state virginly. If this child knows the state makes, the drift of Sheung Shui of north ravine bridge. The old woman has listened to celestial old man has made fun of, too shy to raise one s head. The old saying says, bully the bamboo brain, don t bully the bamboo shoot ovum (bamboo shoot just excavated) . More than ten years later, that is called knowing the child of week really ran and knew the state, act as knowing that winter of the state him, send of big flood for days on end in the area of small stream of Si, wash away the north ravine bridge. Not the bridge, it is inconvenient to cross the small stream. (1674) in the 13th year of Kangxi ,Play the people of bridge village at the place where from the original north ravine bridge, rebuild a wood strip arch bridge, this is this north ravine bridge where people saw now.
Most of this stories are certainly fictitious, but Lin really has knows in the family for week Person, <<Lin's room table) China " inscription " Talk about, there are two graves after saying it is first ancestor Lin Jian's tomb, " the left is that large and medium doctor's appearances are common the page, right is gentle and second and common. Vulgar breathes out and knows the state tomb, a second a common one of Gavin knows for week, it is not officer's name too. " There are a lot of commercial shops in the north ravine bridgehead, it is villagers' place of trade and business. There was a stage in the east of the bridge originally. According to the local folkways and customs, when the beginning of the year, the villagers should go to the hall waterfront, big old old man's palace to make a vow, earnestly hope gods bless the Good Harvest, shut family's reunion. By the end of the year, redeem a vow to a god and and will lift old 14 and Chen DaWeng's statue and go to the theater in front of getting to the stage of the north ravine bridgehead. This activity lasts four days from beginning to end. Among the blue mountains and green waters, the north ravine bridge seems unusually beautiful. Obviously, with the makes up and separate red all overing of it. The red on the board of trials and hardship is used very well, striking but not vulgar., can see the exquisiteness of artisan's craft from it. Red application makes the whole color of north ravine bridge different from the green natural environment around, have stressed the subject position of the shelter bridge.
The more important thing is this kind of proper one is red can merge with the natural color of the surrounding environment, one may well say that brings out the best in each other; Though the intersection of trials and hardship and board of the north ravine bridge exert, the column shelf in the corridor room keeps the log true quality, natural and simple. Bridge most stone of room quality attachment either too much to chisel and carve, give somebody fresh water, produce lotus, natural to expose to the sun the fresh sense of the decorations.