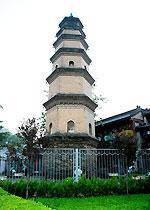 The treasure celebrates the one of tower of China of the temple in the north of Shu Yuanmen in west Annan door up to the present. Treasure celebrate the temple build in King Wen of Sui Dynasty Renshou 601- 604)In the period of, the benevolence workshop was fitted in Sui large Xingcheng in the former address.

Tang make tower in temple with five the intersection of color and brick at the Wencong, so treasure celebrate temple call temple, Tamerlan of China, too. The hall is destroyed in the war at the time of five generations, only the tower exists. Bright Jingtai ( 1451) in two years Move the tower and build the temple in the present location.

Wan Li ( 1573- 1620)In the period of Feng from I give lectures with among them. ( 1723) in the first year of Yong Zheng The monk lives in to rebuild the temple pavilion on gentle day. Treasure celebrate the intersection of temple and China about 23 meter high tower have, seven, level take the form of hexagon, have Wei, Sui, Tang statue of Buddha of stone engraving of era inside.

And then he moves the volume, the bright scene ( 1451) in two years in existence Rebuild the stone tablet once. After the foundation of the state, the government celebrated the tower of China of the temple to enter to rebuilt to the treasure. It is Shaanxi Province that lays special stress on protecting the unit.