Travel at the South the Great Wall Western Hunan of China

Travel at the South the Great Wall Western Hunan of China 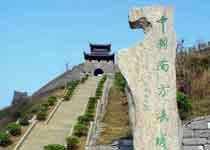 After reaching the phoenix, takes the regular bus that phoenixes to my camped at the bus stop, fare is about 3 yuan, go to the South the Great Wall to get off.

China southern the Great Wall was establish in the 33rd year of Jiajing in Ming Dynasty A.D. 1554) Complete tomorrow opening for 3 years A.D. 1622) The Great Wall start from in the south with the intersection of Tongren and pavilion of juncture imprisoning, the intersection of the north and the intersection of magpie and camp to reach Jishou, among them the majority is run through and passed within the territory of the phoenix county, roughly new phoenix s camp, our camp, ancient pair of camp, win in camp, town small stream camp, shake the military camp. Total length 190 kilometer about, known as the the intersection of seedling and the intersection of boundary and wall under Wan ,One of the ancient buildings where it is that Chinese history goes to work Cheng is huge.
Southern the Great Wall have frontier juncture, camp one and sentry post along every three 2.5 kilometers of city wall, in case the people of seedling rise in revolt. For instance: Pavilion imprison and dark nest imprison and I imprison, pacify frontier juncture,etc., nowadays a gleam of faintly visible pillbox, fort and wall this. It isolates the north and south of western Hunan seedling boundary, regards the north as the people melting outside grow circle The intersection of regulation and seedling leave the country, Chinese enter cave ,It is forbidden to associate in trade and culture of seedling, Chinese.
The city wall is about 3 meters high, the bottom is 2 meters wide, top on the wall is 1 meter wide, perhaps because the military strength of the southern ethnic minority is stronger than that of the northern ethnic minority, the Great Wall, boundary of seedling, build grand to strengthen as northern the Great Wall just, size 1/10 to 1/6 of the Great Wall that the stone used is only northern.
Since Ming and Qing Dynasties, the stone at boundary the Great Wall of seedling was being dismantled and built the room, built the bank by locals constantly. We can only see the city wall off and on and some intact castles today.
Southern the Great Wall, it is a true entity s remains of history and culture, it has characterized a dynasty, have contained and dissolved political/economical, military affairs, culture phenomenon of that dynasty, the spiritual essence of the method of running a country of the framework, that dynasty, it is to study the Ming and Qing Dynasties to conquer and rule the lifelike historical historical data to the outlying ethnic minority.