Bishushanzhuang (aka the Chengde Summer Resort) is located in the northern part of Chengde City, Hebei Province. The park is 5.64 million square meters, has 110 buildings, bounded by a 10 km zigzag wall. It was a palace for the Qing emperors to spend their summer days. The project began in 1703 and was completed in 1792. At the north end of the gardens the pavilions were decimated by warlords and Japanese invaders and even the forests have suffered cutbacks.

The Summer Resort has a simple and elegant layout. It was built by the natural mountains lakes, rivers and in a style of quadruple courtyards, with grey bricks and tiles. With a good deal of imagination, you can perhaps detect traces of the original scheme of things with borrowed landscaping from southern gardens (Suzhou, Hangzhou, Jiaxing) and Mongolian grasslands. There is even a feature for resurrecting the moon should it not be around - there is a pool that shows a crescent moon created by reflection of a hole in surrounding rocks. 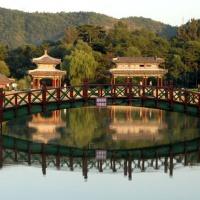 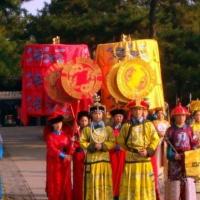 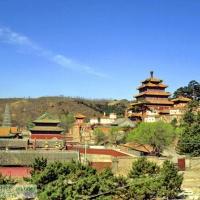 Passing through Lizhengmen, the main gate, you arrive at the Front Palace, a modest version of Beijing's Palace. It contains the main throne hall, the Hall of Simplicity and Sincerity, built of an aromatic hardwood called nanmu. The hall now functions as a museum, with displays of royal memorabilia, arms, clothing and other accoutrements, and the emperor's bedrooms are fully furnished. Around to the side is a door without an exterior handle, through which the lucky bed partner for the night was ushered and stripped and searched by eunuchs. 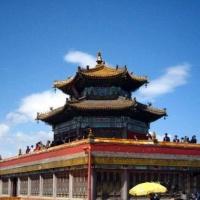 The double-storied Misty Rain Tower, on the north-west side of the main lake, was an imperial study; further north of that is the Wenjin Chamber, built in 1773 to house a copy of the Sikuquanshu, a major anthology (classics, history, philosophy, and literature) commissioned by Qianlong. The anthology took 10 years to put together; four copies were made of which three have disappeared, and the fourth is in Beijing.
Ninety per cent of the compound is taken up by lakes, hills, mini-forests and plains, with the odd vantage point pavilion. At the northern part of the park, the emperors reviewed displays of archery, horsemanship or fireworks. Horses were also chosen and tested here before hunting sorties. Yurts were set up on the mock-Mongolian prairies (a throne, of course, installed in the Emperor's yurt) and picnics were held for minority princes.
The Summer Resort in Chengde is the largest intact imperial garden and palace in China. It was designated as the World Cultural Heritage Site in 1994 by the UNESCO. 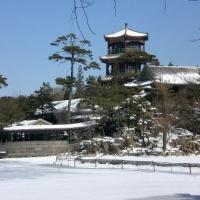 To the north and north-east of the Summer Resort are former temples and monasteries. They started off at 12 many years ago (commonly call 'Eight' in the name, thought there are over twelve temples in the past, because these temples were managed by eight temples in the old days), now the numbers given vary from five to nine (Japanese bombers, warlords).

The outer temples are about three to five km from the garden front gate; a bus taken to the northeast corner will land you in the vicinity. The temples were built 1713 to 1789 and listed as the World Cultural Heritage Sites in 1994. Clockwise, the temples are:

Putuozongcheng Temple is the largest of the Chengde temples, and is a mini-facsimile of Lhasa's Potala, hence also known as the Lesser Potala It was built for the chieftains from Xinjiang, Qinghai, Mongolia and Tibet to celebrate Qianlong's 60th birthday and was also a site for religious assemblies. It's a solid-looking fortress, but no guts and in bad shape, parts inaccessible or boarded up and gutted by fire.
Note: Putuozongcheng, the transliteration of the Tibetan 'Potala' in Chinese. 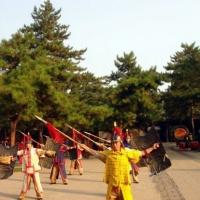 Xumifushou Temple was built in honor of the sixth Banchan Lama, who visited in 1781 and stayed here. It incorporates elements of Tibetan and Han architecture and is actually an imitation of the Jashilumbu Monastery in Shigatse (Xigaze), Tibet. The temple differs greatly from the Jashilumbu Monastery, but its red platform, filded cupola and the shape are very much in the style of the monastery. At the highest point is a hall with eight gilded copper dragons commanding the roof ridges and behind that sits a glazed-tile pagoda.

Puning Temple is also modeled on a Tibetan temple, built to commemorate Qianlong's victory over Mongol tribes - the subjugated leaders were invited to Chengde. A stele relating to the victory is inscribed in Tibetan, Mongol, Chinese and Manchu. The main feature is a Bodhisattva, towering 22.28 meters; this wooden Buddha has 42 arms with an eye on each palm. The statue weighs 110 tons and is the highest and largest wood statue in the world. The temple's buildings some with the Chinese style, some with Indian style, some with Tibetan style or the combination of the three.

Anyuan Temple was built in 1764 for conciliating a fugitive tribe from Xinjiang. It is a copy of a temple in Yili, Xinjiang, but now only the main hall is left, and many Buddhist frescoes are still found inside. The hall is covered by the peculiar black glazed tiles, with the traditional architectural style of the Mongolian lama temples. 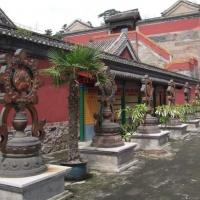 Pule Temple is definitely the most interesting of the temples. You can scramble along the banks of the rivulet nearby and a road leads off near a pagoda at the wall of the garden. The temple was built in 1776 for visits of minority envoys (Kazaka among them). It's in much better shape than the other temples - retiled and repainted. At the rear of the temple is an unusual round pavilion, called the Hall of Brightness, which has a double-eave, a doom roof and a magnificent ceiling, reminiscent of the Hall of Prayer for Bountiful Harvests at Temple of Heaven in Beijing.

Pushan Temple is a central China Buddhist style architecture, which was built in 1713 for celebrating Kangxi's 60th birthday. This temple was destroyed by a warlord in 1920's, only some ruins and old trees remain.

Puren Temple was also built at the same time as the Pushan Temple and for the same purpose to celebrate the emperor's birthday. At that time all the Mongol tribes - the subjugated leaders were invited to Chengde. This is an entirely Chinese-style architectural complex. It was partly destroyed by the Japanese bombers, after the founding of the P.R.C, it was restored. Its layout, Buddhist art and many cultural relics has very high historical value for study the Qing dynasty. 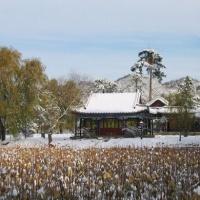 Puyou Temple was constructed to celebrate Qianlong's 50th birthday and his mothers' 70th birthday in 1760. The main buildings include the Mountain Gate, Falun Hall, Dafangguan Hall, Heavenly King Hall, Sutra Tower and Shunshanfang (the rooms built against the mountain or hill). In 964, the temple was attacked by lightning, the Falun Hall and some other buildings were damaged, some of the 500 Buddhist arhats in the hall, only 178 survived.

Shuxiang Temple was modeled on a temple (and has the same name) in Wutaishan Mountain in 1774. This royal temple is famous for its buildings, artificial caves and rockeries; a small octagonal pavilion and Buddhist chambers were once built on a rockery, they make it looks like a garden. In the old days, only the Manchu (one of the ethnic groups in China, the ruler of the Qing dynasty) Lamas lived here to render the Buddhist sutras. This Chinese-style temple has been restored in 1980's.

Travel tips to the Eight Outer Temples
All the temples are open 8:00am to 5pm; the entrance tickets look very beautiful please keep some if you are interesting in them; interestingly, the two Buddhas are locked together in the Pule Temple, just ask your guide what they are doing, why they are called 'Happy Buddhas'.