The Dazu Rock Carvings contains all the cliffside carvings in Dazu County. The collection is composed of the rock carvings in Beishan, Baodingshan, Nanshan, Shimenshan as well as Shizhuanshan, all of which are of the highest artistic attainment and demonstrate the most exquisite skills. 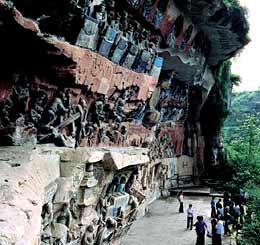 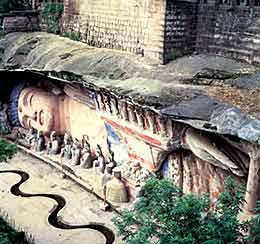 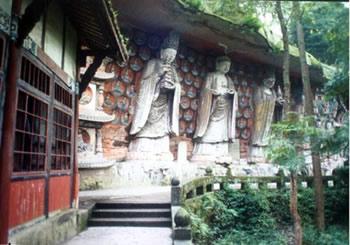 Dazu County, reputed as 'the county of rock carving' is located at the southeast of Sichuan province. It is 271 kilometers (about 168.4 miles) from Chengdu on its west and 167 kilometers (about 103.8 miles) from Chongqing on its east. The whole county has an area of 1,400 square kilometers (about 540.5 square miles), and it covers a history of 1,230 years since it came into existence in 758 during the Tang Dynasty (618-907).
The Dazu Rock Carvings was built from 650 in the Tang Dynasty and continued to the Ming Dynasty (1368-1644) and the Qing Dynasty (1616-1911). It is as famous as the Mogao Cave in Dunhuang, Gansu Province. The rock carvings in these places are very distinguished both at home and abroad. Among the rock carvings, there are more than 5,000 statues and over 100,000 Chinese characters of inscriptions and epigraphs. The Buddhist statues dominate in this rock carving group, and the Taoist and the Confucian stone figures can also be seen. 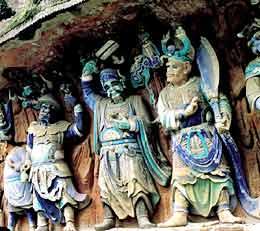 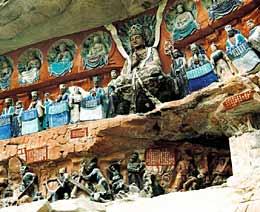 - Beishan Rock Carving
It is 2 kilometers (about 1.24 miles) away from the northwest of Dazu County. Figures in this part are something like 'an Assembly of Oriental Beauty', since it enjoys good preservation and elaborate craftsmanship. Tourists can see the graceful statue of Samantabhadra Bodhisattva, crowned as 'The Oriental Venus'. Rock carvings in this part reveal the common Buddhist faith. Standing here for a while, one may feel that it is really a Buddhist palace.
- Baodingshan Rock Carving
It is 15 kilometers (about 9.32 miles) from the northeast of Dazu County. It is made up of 13 groups of stone carving figures, totaling nearly 10 thousand cliffside figures. In this part, magnificent rock figures in different shapes compose a story. One will see some original and ethnic Buddhist rock features.
- Nanshan Rock Carving
Standing at the southeast of Dazu County, the Taoism doctrine is the main theme in this part. Taoist gods' figures are carved vividly .The cave of Sanqing demonstrates the Taoist gods' ranking in the Song Dynasty (960 1279). Therefore, tourists will be impressed by these colorful clay creations.
- Shizhuanshan Rock Carving
This section is 25 kilometers (about 15.5 miles) far from the southwest of Dazu County. The niche of Confucius and that of Lao Tzu can be seen here .Buddhist, Taoist and Confucius statues are integrated in this part which is quite rare in Chinese grotto art.
- Shimenshan Rock Carving
Apart 20 kilometers (about 12.4miles) from the eastern part of Dazu County, the Shimenshan Rock Carving combines Buddhist and Taoist statues, but the later one predominates. In addition to these stone figures, there are also some inscriptions and remarks beside the figures. Representaion of some gods' figures are lifelike and vivid. For example, outside the niche of the Great Jade Emperor stands the statuary of Shun Feng Er meaning 'Favorable Wind Ears' which looks as if he is looking into the distance and the figure of Chien Li Yen meaning 'Thousand League Eyes' which looks as if he is listening to attentively. 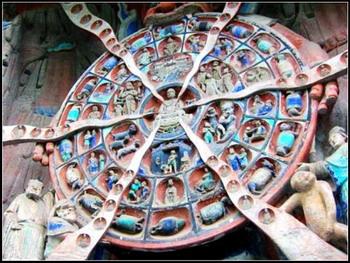 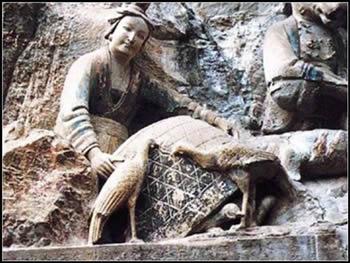 Many statues show the Buddhist and the Confucius doctrines, particularly the filial piety. In 1999, the Dazu Rock Carving was ranked as a World Cultural Heritage Site. Every year many thousands of tourists from home and abroad pay it a visit.
You may take a bus at the Caiyuan Ba, Chongqing Municipal to the Dazu County Bus Station (CNY 45). There are two bus stations at the Dazu County, one for long distance another for short distance which is the one to the spot area. After arrival at Long-Distanced Bus Station of the Dazu County two hours later, you may hire a rickshaw (CNY 2) to the Short-Distanced Bus Station. Then taking a bus to the Baodingshan (CNY 3) will take you twenty minutes and later you will arrive the entrance of this spot. At last you will take a rickshaw to the ticket office of the spot.