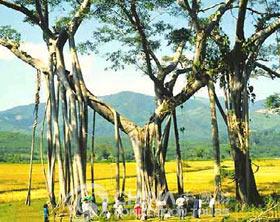 The garden occupies an area of 4 hectares, within the garden, there are the Rain Forests of Xishuangbanna and the Ethical Plant Culture Museum, the Ethical Wild Vegetable Zone, the Traditional Drinking Plants Zone, the National Medicinal Plants Quarter and Religious Plant Quarter etc. In order to demonstrate the notion for the harmonious co-existence in-between human beings and plants, this Garden also domesticates many native Xishuangbanna animals such as peacocks and sloth monkeyetc.

The Park of Folks & Plants would become an important base for the ethical botanical research and popularization of sciences.

The famous pagoda is in Damenglong village which is 70 kilometres south of Jinghong and only a few kilometres from the Sino-Burma border. The silver pagoda was built in 1204 in honor of a footprint said to be left by Sakyamuni himself during his visit in the area. The pagoda actually consists of 9 stupas, with the primary stupa in the centre while the other 8 smaller stupas clustering to its base.

The primary stupa rises 55 feet. Bells hung on the stupas give wonderful tinkles in the breezes. Below one of the stupas and in a niche the Buddha's footprint is enshrined. Not that far across a small valley, there is another black pagoda which is less famous.

have distinct characteristics. Most are square and face east. The General Buddhist Temple in Jinghong is considered most sacred of all. It was formerly place of worship of the local ruler, and remains the most visited temple in the area.

Another architectural wonder in Xishuangbanna is the Jingzhen Octagonal Pavilion, constructed in 1701 as a center for confession, scripture chanting and debate. A pipal (fig tree) stands to the left of the pavilion, under which it is said that Sakyamuni attained enlightenment.

National Ethnic Group Park is situated near Liusha River in the southern suburb of Jinghong, 4 km away from the airport. The 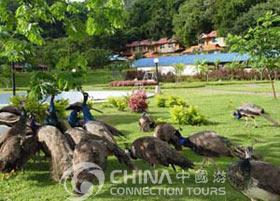 park, consisting of south section and north section, covers a space of 67 hectares. Featuring rare tropical plants and animals as well as ethnic group customs, the park is a showcase of the beautiful Xishuangbanna.

The capital of Xishuangbanna Prefecture is "Jinghong", which means "the City of Dawn" in the Dai language. It is 692 km from Kunming. There are more than ten nationalities including the Dais, the Hanis, the Jinuos and the Bulangs, etc in its land. There live over 5,000 species of plants and hundreds kinds of rare and valuable birds and animals in its 20,000 square kilometers tropical virgin forest, thus Xishuangbanna is noted as "the Kingdom of Plants and Animals" and "An Emerald on the Tropic of Cancer".

Lying at the western suburb of Jinghong, the institute exerts a strong pull on tourists although it opens to public just a few years. In additional rubber plantation, the institute plants over 1,000 plants with economical or medicinal value. The large variety needs a botanist to figure out what they are. In the plantation, visitors get access to Zhou Enlai Memorial, which was built to commemorate the China's beloved premier's 1961 visit.