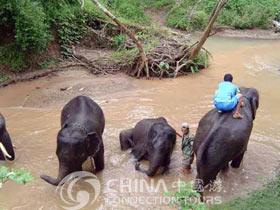 Wild Elephant Valley is to the North of Jinghong City, about 50 kilometers far. It actually is a nature reserve for tropical rainforest and wild lives. Here in jungle live about 70 wild Asian elephants. Wild elephants usually come out at night, so people built a small hotel on tops of trees in forest for tourists who want to observe wild elephants closely. A 2-kilometer long cable way in the park enables people to enjoy rainforest view from the air

Lancang River originates from the Qinghai-Tibet Plateau, it penetrates Yunnan from northwest to the south and transverses Xishuangbanna; after it inflows to the border areas of the Laos and Burma, it is called Mekong; and it passes through the Laos, Burma, Thailand, Cambodia and Vietnam and ingresses into the South China Sea at last.

It is a famous international river in Asia and is often called the Danube of Asia. Lancang River is the Chinese translation for its Dai name, and it means "the river with millions of elephants" in the Dai language. There is a folktale in Xishuangbanna, which says: "Dai folks rely on elephants, and elephants depend on Dai folks".

The story goes: when the ancestors of the Dai folks immigrated to the Lancang River valley, the folks and drought animals in the villages are often injured by tigers and the people were quite afraid. A wise old man hit upon an idea and he directed the folks to plant a lot of bamboos and banana plants.

Elephants liked to eat bamboos and bananas, thus, they came to seek for food around the villages in groups; the tigers could not win over elephants, thus, they stayed away from the Dai villages. Nowadays, only 200-300 elephants are left in this part, they become animals in danger, and are protected in the protection area of the rain forest in Xishuangbanna.

The abused hunting and the drastic changes of the ecological environment have changed Lancang River or "the river with millions of elephants"into a titular noun.

The Dai people of Xishuangbanna still live according to their ancient traditions and customs. Most Dai villages are by rivers and lakes, and their bamboo dwellings are built in the shadows of bamboo groves. There are hundreds of species of bamboos in Xishuangbanna and the Dai people's life, culture, art and religion are all closely interwoven with this special plant. 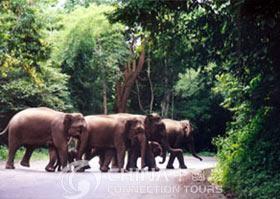 The Water-Splashing Festival from April 13 to 15 is the most important Dai celebration. On the first day they bid farewell to the old year, on the second they splash water, and on the third they greet the new year. According to Dai tradition, water splashing brings fortune and good luck. The Dai people believe that getting drenched at the festival brings a whole life of good luck, and so a happy atmosphere of singing, dancing, screaming and splashing water pervades. It is known as the "Oriental Carnival."

Drink in China's tropical scenery, pray and make a wish in the temple, try to decipher a pattra-leaf sutra, and splash water on your Dai friends for good luck - there's plenty to see and enjoy in Xishuangbanna.