The Great Wall of China was originally built in the Spring & Autumn Period (770-476BC), once stretched approximately 12,000 kilometers from the Bohai Sea in the east to the Gobi Desert, Lop Nor in the west. It is actually a series of stone, bricky and earthen fortifications and puts itself on the map as the greatest of the eight ancient architectural wonders in the history of human civilization.

In 221 B.C, when the first China's emperor, Chinshihuang finished conquering all the kingdoms, he linked all the walls that belonged to the different states. And since then the Great Wall was built, rebuilt to protect the northern borders of the Chinese Empire from the Hun's and Mongolian attacks during the rule of successive dynasties.

The Great Wall is a must see for those who visit China. Along the giant dragon winds through the lofty mountains, great rivers, and boundless deserts, many hikers enjoy their tour by unveiling the interesting ancient Chinese facts and recording the picturesque landscape take their breath away. For many years, most people have flocked to the sections in Beijing and its nearby areas. But now some begin to explore the western part since the portion shares the same line and mystery with the ancient Silk Road.

It is just as a Chinese proverb goes that "He who has never been to the Great Wall is not a true man!", therefore you should not miss this great symbol of the Chinese nationality.

The following 6 sections are in Beijing or its nearby counties which were renovated and which are regularly visited by tourists from across the world. 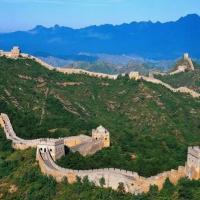 Gubeikou Great Wall
Gubeikou is an important strategic pass of the Great Wall, which is located in Miyun County, Beijing. This section has been reconstructed many times since the Eastern Zhou dynasty (770-256B.C.). It is famed for its natural beauty and places of historical interest along the wall. Both sides of the wall have the ancient war fields, royal hunting grounds, emperors' summer resort remains, barracks ruins, and old post roads... 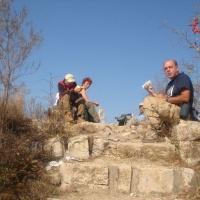 Simatai Great Wall
Located in Miyun County, Beijing, 120 kilometers from Beijing downtown, Simatai Great Wall is renowned for its unique watchtowers, walls and the stunning natural beauty. This segment is very precipitous, still keeps the original form and known as the living Chinese Great Wall Museum. Wangjing Lou (Viewing Beijing Tower) is one of Simatai's famous watchtowers, 986 meters above sea level. Walking across a flying passage across between the cliffs, a courageous visitor can reach there.

Jinshanling Great Wall
Located in the Luanpin County, Hebei Province, Jinshanling Great Wall was initially built in 1368 AD, and has never been reconstructed for over 400 years. It snaked away into the distance and meets the Simatai Great Wall finally (the whole section is about 10km). Jinshanling section is considered the quintessence of the Great Wall. Hiking along the wall, you can see many different stylish watchtowers, emplacements, block walls, stables, and storehouses. In addition, the beauty of Beijing and Miyun Reservoir seen from its highest watchtower - Wangjing Lou (literally Viewing Beijing Tower, 980 meters above sea level) is a tremendous spectacle. These years, hiking along this section of the Great Wall (about 4 hrs) has become a must program for the foreign hiking enthusiasts. See more on this section.

Mutianyu Great Wall
South East of Jinshanling is the Mutianyu Great Wall, which was originally built in over 1400 years ago, and rebuilt in the early years of the Ming dynasty (1368-1644). It winds along the valleys and lofty, cragged mountains from the southeast to the northwest for about 2.25km. It is connected with Juyongguan Pass to the west and Gubeikou to the east. Along the wall, the watchtowers are found building on the top of the peaks or on the precipitous cliffs. Here there are three sections of wall meet in a watchtower. This section is located in the Huairou County, Beijing, is only 70km from the downtown. Further information on Mutianyu section.

Jiankou Great Wall
Jiankou Great Wall also known as the Arrow Nock Great Wall, was built in the Huairou County, Beijing. It stretches along the lofty cliffs and perilous peaks, looks like a "w" from afar. Jiankou Great Wall is one of the famous sections of the Ming-dynasty-built Great Wall. For admiring the majesty and danger of the Great Wall of China, the photographers and tourists from all over the world have a liking for visiting this section.

Other Famous Sections of the Great Wall

Shanhaiguan Pass Great Wall
This Ming-dynasty-built Great Wall is lying in Qinghuangdao City, Hebei Province. It is the eastern extremity of the wall. In fact, this section is a small city connected to the Great Wall and known as the "No. 1 Pass under Heaven". Shanghaiguan Great Wall is called the "Museum of the Construction of the Great Wall", because of its many ancient buildings including the grand city gates, towers, temples, and moat.

Laolongtou Great Wall
About 4km to the south of the Shanghaiguan Pass Great Wall is the starting point of the wall --Laolongtou, where the Great Wall begins there and meets the sea. When climb on its Denghailou Tower, a giant dragon winds through the mountains and put its head into the wide sea to drink water can be enjoyed.

Yanmenguan Pass Great Wall
Yanmenguan aka Goose Gate Pass, located in Dai County, Shanxi Province, which is a very important pass of the Great Wall for military in western China. And as an ancient war field, the Han, Hun, Turk, Uygur, Xianbi, Qiedan, Nuzhen and Mongolia had made their wars here. Now some famous ancient temples, shrine ruins of the Warring State Period (403-221B.C.), watchtowers, and beacon towers are still found on the Great Wall of Yanmenguan Pass.

The Jiayuguan Pass Great Wall
Being built at the foot of the Mt. Jiayu that located in the southwest of the Jiayuguan City, it was named. This section was built in 1372 A.D, which is the wall's terminal point that built in the Ming dynasty in the west China. This wall is 11.7 meters in height and 733 meters in length, it is actually a trapezoidal city pass with stately towers and turrets. Standing on the pass city wall, tourists can give an eye-popping view of the scenery nearby.

Ning Xia Ancient Great Wall
This section was rammed with earth in the Warring States Period (403-221B.C.) and belonged to the Chin State. Its present height only ranges from 1meter to 3 meters. Every 200--300 meters, a block platform is attached to the wall. Many ruins of beacon towers are found in its nearby fields, on the mountains and on the mountain passes that it passes through. The Ning Xia Ancient Great Wall makes its journey from the Gansu Province then reaches the south part of the Xiji County, Ningxia Province, and then bends to the northeastward to wind around the Guyuan County. From there it bends to the southeast and runs through the Yangcheng and finally ends in the Zhenyuan County, Gansu Province.