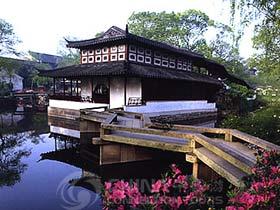 Located in the northeastern part of Suzhou, Zhuozhengyuan (Humble Administrator's Garden), with a total area of 51,950 square meters (5.2 hectares), is the largest private garden in Suzhou. It has been listed as one of the four most famous national classic gardens together with the Summer Palace, Mountain Summer Resort in Chengde and Lingering Garden of Suzhou. The garden is a masterpiece of Ming Dynasty Chinese classic garden. With the central pond on focus, it is a compound of various structures, including pavilions, terraces, chambers and towers, which are divided into the eastern, middle and western parts. The middle part is the cream of the garden with marvelous hills, clear waters, exquisite buildings and exuberant trees and flowers. The buildings in the western part of the garden are properly arranged around the lake. Among them, the Hall of the Thirty-Six Mandarin Ducks and the Hall of Eighteen Camellias are the most magnificent. Both being stylishly furnished, with paintings and calligraphy works hung on the walls, these two halls symbolize the leisurely life of the owner. At the end of the west garden, about 700 bonsais are displayed. Humble Administrator's Garden is also a representative of the horticultural art of the Yangtze River Delta. A treasure house of architectural art, calligraphy works, carvings, and paintings, the garden was listed as a key national cultural relic under state protection in 1961.