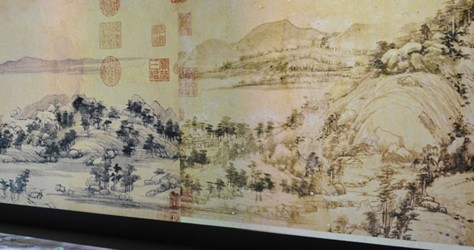 The full pictureOne of China's best-known ancient paintings, the Dwelling in the Fuchun Mountains, is shown in its entirety for the first time in more than 360 years in the Palace Museum, Taipei, on Wednesday. The painting was damaged and torn in two in the 17th century. One part of the painting was kept in Taiwan after 1948 while the other section remained on the Chinese mainland. Photos by Li Mingfang and Han Chuanhao / Xinhua

The icon became the center of media attention when Premier Wen Jiabao expressed his hope in March 2010 that the two pieces could be brought back together.

Lien Chan, honorary chairman of the ruling Kuomintang in Taiwan, said on Tuesday the reunion was of "extreme importance" because it was the result of cross-Straits peace and cooperation, Xinhua News Agency reported.

Taiwan leader Ma Ying-jeou also extended his congratulations after the 661-year-old landscape was once more complete. It will be displayed at the Taipei Palace Museum from June 1 to Sept 5.

The 33-centimeter-wide by 694-cm-long masterpiece by the famous Yuan Dynasty (1271-1368) painter Huang Gongwang (1269-1354) was burned in 1650 by collector Wu Hongyu, who was obsessed with it. He wanted to take the painting with him to the afterlife and ordered it to be burned as he lay dying but his nephew saved the painting from the fire and only part of it was damaged. What was left was then torn in two.

The Broken Mountains, which is the smaller portion, has been in the Zhejiang Provincial Museum in Hangzhou since 1956 while the larger piece has been in the Taipei Palace Museum since 1948.

To celebrate the historic reunion of the antique painting, Zhao Hongzhu, Party chief of Zhejiang, went to Taiwan with a delegation on May 26.

The Zhejiang delegation also conducted exchanges in the fields of culture, trade, technology and education during the visit, which ended on Wednesday.

According to the Taipei Palace Museum, its exhibition will be divided into two parts and a total of 83 works of art will be displayed, among which 12 are from six museums on the mainland.

The first show, which will last from June 2 to July 31, will display the reunited painting. The second exhibition, which will run from Aug 2 to Sept 5, will feature replicas of Huang Gongwang's masterpieces and explain the importance of his work.

Many people on the mainland said they too would like to see the painting.

"Though I cannot witness this reunion, imagining it also gives me some comfort," said a netizen named Jeakey on the Sina micro blog.

To memorialize the exhibition of the reunited painting, the Taipei Palace Museum has created a range of more than 40 souvenirs, including postcards, scarves and phone shells. Experienced guides at the museum will also explain the story of the painting to visitors.

Fan Liqing, spokeswoman for the State Council Taiwan Affairs Office, said earlier this month in Beijing that the palace museums on both the mainland and Taiwan should strengthen exchanges in order to "jointly promote Chinese culture", according to Xinhua.