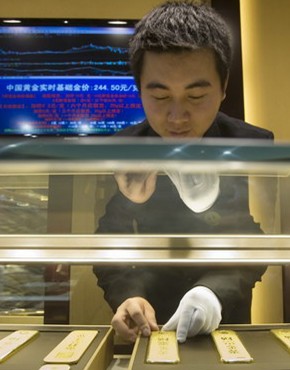 BEIJING - China National Gold Group Corp, the State-owned company that controls the nation's largest gold deposits, wants to invest in projects in Africa as it expects bullion to trade near record levels for the next three years.

"We aim at large-scale mines with good potential in countries that have close ties with China and domestic stability," President Sun Zhaoxue, said in an interview in Shanghai. "Gold prices will foreseeably fluctuate at historically high levels for another three years."

Gold jumped to a record $1,577.57 an ounce this month, helping make this year one of the busiest for gold deals since 2006. Citic Group, China's biggest State-owned investment company, and partners agreed this month to buy Gold One International Ltd for about A$444 million ($469 million) to gain assets in South Africa.

The value of announced gold deals so far this year stands at $16.8 billion, more than the totals for the entire year in 2009 and 2008, according to data compiled by Bloomberg.

China National, owner of the Yangshan deposit in Gansu province, may also invest in Southeast Asia and Central Asia, Sun said. It currently doesn't operate any mines outside China.

The company is also reviving previously uneconomical mines in China's western provinces as record prices make it profitable to work them, Sun said, adding that it's also increasingly exploiting lower grade deposits near existing mines because of higher prices.

The extra production may boost China's output to 400 tons in three years, Sun said on May 27.