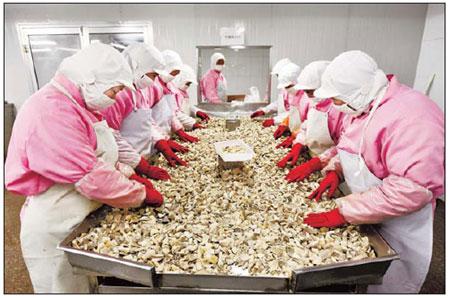 Workers sort frozen mushrooms for export to Europe at a factory in Rizhao, Shandong province. The European Union, the United States and Japan were China's top three trading partners in 2010. [Photo / China Daily]

BEIJING - The European Union (EU) will continue to be given top priority by Chinese exporters, but they are "much less confident" about selling products to developed customers such as North America, Japan and South Korea, according to a foreign trade report released on Tuesday.

It concluded that the nation's foreign-exchange reforms and the continuous appreciation of the yuan have not exposed Chinese exporters to the severe risks that had been expected, although the majority of them have felt a negative impact.

Despite global concerns that Europe's debt crisis is worsening, Chinese exporters still believe the EU will remain a favorable market and be their first choice in the years ahead, according to the report from the University of International Business and Economics (UIBE) in Beijing.

Based on interviews with 300 Chinese exporters - the majority operating in the manufacturing sector - in more than 20 provinces and municipalities, the report found that 52 percent of interviewees are planning to sell goods to European nations.

"The reason for that is probably the appreciation of the euro against the yuan, which makes Chinese goods competitive," said Zhang Yansheng, director of the Institute for International Economic Research at the National Development and Reform Commission.

But "the Chinese exporters have to be aware of the risks", as the European debt crisis will probably get worse and force the bloc "to launch more trade remedy cases against China", he warned.

In 2010, the EU, the US and Japan were China's top three trading partners. But trade-remedy cases against China launched by the EU have been rising during the past year. In May, the EU announced its first-ever anti-subsidy and anti-dumping duties on Chinese coated fine paper.

In other markets, 38 percent of participants considered exporting goods to South America in the coming years. Southeast Asia scored 33 percent and the African continent had 32 percent.

"There is no doubt that emerging markets, which are enjoying brisk economic growth and have huge consumption potential, are enticing," said Zhang.

In 2010, China's exports to Brazil grew by 73.3 percent, South Africa by 46.7 percent and the Association of Southeast Asian Nations by 30.1 percent, year-on-year.

Only 29 percent of the interviewees chose to tap North America. Moreover, 66 percent said North America is their major market.

Since July 2005, when China launched its foreign exchange reforms, the yuan has gained 26 percent.

Seventy-five percent of the interviewees agreed that this has had a huge impact on Chinese exports. Meanwhile, 72 percent said that the rising costs of energy, raw materials and labor will present another challenge.

However, 57 percent disagreed that the appreciation of the currency has exposed them to operating risks.

"The expectation of yuan appreciation and the active measures taken to avoid a negative result have made Chinese companies almost immune to the changes," said Ding Zhijie, a professor at UIBE.