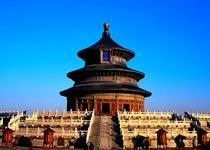 The Temple of Heaven largest in the world and ancient offers a sacrifice to Heaven in the buildings, its rigorous building arrangement, peculiar building structure, magnificent building decoration, is considered to be China an extant group is most exquisite, the most beautiful ancient buildings.
The Temple of Heaven lay in the south of Beijing, established in the 18th year of Yongle of Ming Dynasty (1420) ,It is the place where the emperor offered sacrifices to the god in the world and the five cereals of prayer had a bumper harvest in the Ming and Qing Dynasties. In November of 1998, had legacy register of the world listed in.
The Temple of Heaven is 1700 meters long from east to west, the north and south is 1600 meters wide, the whole area is 2,730,000 square meters. The Temple of Heaven include the intersection of Huan and mound and pray for good harvest two jar, the intersection of enclosure and the intersection of one s job and two outside, take the form of word of going back. North enclosure arc and round, south enclosure intersect at right angle to east and west walls, for square. The north of southern this kind is round, generally called world wall ,It is ancient to symbolize Hemispherical dome Saying. There is not a door in the east of jar wall, the south, three times of the north on exterior, only build two gates in the west -Huan mound jar door piece with lasting jaring( Also call the door of the Temple of Heaven) . But there are the east, the south, the west, four Tianmen of the north around the inner jar wall. The inner jar has sacrificial altars and the Hall of Abstinence, and there are horizontal walls of a thing, the south is Huan s mound jar, jar in order to pray for good harvest of the north.
The Hall of Prayer for Good Harvest in the Temple of Heaven is that one has unique architecture of the national style grandly and very much, gold-decorated the intersection of top and three round to collect together getting sharp roof produce eaves, cover with symbolize heaven Blue glazed tiles,shrink upwards layer layer. The timber structure under the eaves uses and imperial seal colored drawing or pattern, is located in the white marble base, look far into the distance, color is compared with strongly and harmoniously, upper and lower shapes are unified but full of variety. Three sound stones: Outside the door of Imperial Vault of Heaven hall is a road of Ningbo spread from big rectangular stone, stand on the corridor third slabstone, we are turn on on the hall door, and close the window of the whole hall and enable the hall door not go to the hall to there is not any barrier between the shrines for idols or ancestral tablets of centre, then speak to the hall door, can hear three sounds of very loud and clear echoes, and stand outside the hall any place can hear. Because this sound is enshrining and worshipping The emperor day God Building in send out one that come,getting larger very in and echo,there is be human world languages even, it is smelt like the thunder Saying.
The Echo Wall is the enclosure of Imperial Vault of Heaven. The wall is 3.72 meters high, it is 0.9 meters thick, the diameter is 61.5 meters, girth is 193.2 meters. The wall uses rubing bricks and builds to sewing, the top of the wall is covering the blue glazed tiles. The radian of the enclosure is very regular, the wall is extremely smooth and neat, it is very regular to the refraction of the sound wave. So long as two people stand in the east, the west worthy of bringing up the rearing separately, set up along the side of the wall, one speaks northwards by the wall, the sound wave will be refracted and advanced continuously along the wall, pass to another end of 100-200 meters, no matter speak how small the sound is, can make the other side hear absolutely clearly, and the sound is long, can be rated as very interestingly, cause a kind of person s reaction of day to somebody Mysterious atmosphere.
The Hall of Prayer for Good Harvest is in the north of the Temple of Heaven, called praying for good harvest the jar too, it is the earliest building of the Temple of Heaven. The 15th year of Guangxu ( 1889 years) Destroy in the thunder fire, rebuild according to the former state several years later. Present the Hall of Prayer for Good Harvest is a round building of 32.72 meters in diameter, the triple eaves of blue tile of gold-decorated top collect together pinnacles, receive ring upon ring, 38 meters of the total height. The hall flat of the Hall of Prayer for Good Harvest is a round praying for good harvest jar, three layers are 6 meters high, the imposing manner is towering. There is stub wall one again in week in the jar, set up Fan s wood stove, Yi bank, burning stove and obey the platform in the southeast corner. There are emperors to be in the hall in the intersection of the jar and north, one is five wide, originally put ancestor s supernatural card, later on the memorial tablet is moved to the Imperial Ancestral Temple. Still pray for a year of abundance on the door, supernatural storehouse, supernatural kitchen, kill domestic animal s pavilion, subsidiary buildings such as domestic animal s distance and long corridor,etc. go by the jar. There are seven star stones on the square of the south of long corridor, it is the town stone put in the period of Jiajing.