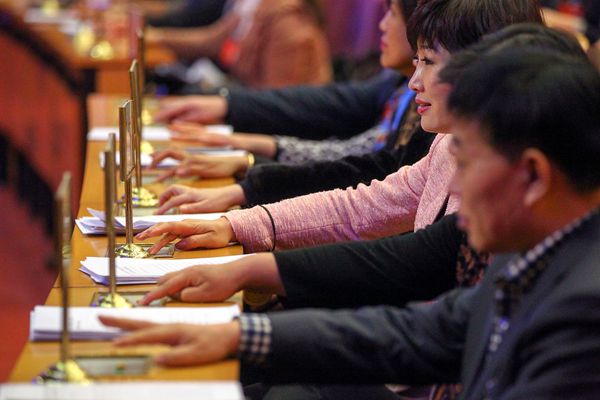 A reduction of PM2.5 particles in Beijing's air was written into law on Wednesday and given priority status for the city's government.

The city's legislature passed the high-profile Air Pollution Prevention Regulation at the end of its people's congress plenary session.

The regulation provides a general framework for action that will be augmented by detailed directives to be published soon. It will take effect on March 1.

The PM2.5 index measures airborne particles smaller than 2.5 micrometers, which have been associated with health risks.

In 2013, the average PM2.5 reading in Beijing was 89.5 micrograms per cubic meter, more than double the national standard. The goal is to reduce that to an average of 60 micrograms per cu m by 2017, according to a statement from the legislature.

Deputies provided 175 suggestions for the draft regulation during the congress. The legal office adopted 111 of those after further discussion.

It is the first time the city government has put air pollution reduction into law, and it will be a high priority, the legislature said.

In addition to the PM2.5 reduction, the regulation provides a basis for balancing environmental concerns with development.

No longer must the government sacrifice the air for the sake of economic development, said Li Xiaojuan, director of the legal office of the standing committee of Beijing Municipal People's Congress.

Fang Li, spokesman for the Beijing Municipal Environmental Protection Bureau, welcomed the law, saying it will provide more legal protection for environment-related departments to do their work.

Fang praised the regulation, which includes a section on dust prevention and requires the city's traffic department to limit the number of vehicles.

"Prevention of air pollution cannot depend on us alone," Fang said. "It requires an effort from all walks of life. I was glad to see the idea of 'mutual control' written into the regulation."

One-third of the new statute deals with liability and punishment, "which means violators will be more strictly regulated", he said.

Beyond fines, however, illegal behavior will be appended to an enterprise's credit portfolio.

"When I visited Japan, I found that environmental authorities there did not check the pollutant discharge of plants frequently, because if a factory illegally discharges, its credit will be reduced and its business will be affected," he said, adding that such punishment can be a bigger threat to violators than fines, and that it leads to improved self-regulation.

Chai Hefa, chief climate expert at the China Research Academy of Environmental Sciences, said that it's good to see the "firm resolve" of the government and the strong steps taken to curtail pollution.

While it's an aggressive target, reducing PM2.5 concentration to 60 micrograms per cubic meter still stands a chance of success, according to Chai.

Chai said the credit-reduction system would make polluting enterprises more self-aware because they rely heavily on the market. Tying pollution discharges to an enterprise's creditworthiness will act as a natural constraint on contamination, he said.

In addition to the government's implementation and supervision, reports from the public will be sought, he said.

"The lack of monitoring and surveillance has led to many enterprises' continuing to pollute despite the rules," he said.