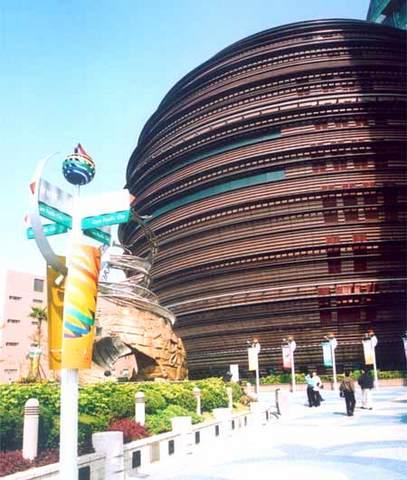 Developed finishing to 2001 since 1987, went through 15 years from beginning to end, was under the jurisdiction of through will build great economic construction planning, total the intersection of investment amount and 24 billion of new Taiwan dollar, exactly, about 900 million U.S. dollars (until the exchange rate was converted at that time) .

Design 19 storeys, including seven storeys for 12 floors and underground (include the four storeyed parking area) on the ground in the building of the city of the capital And; 15 storeys among them are the store, the whole centre plans to have seven main customer s entrances and exits, four parking area entrances and exits.

The city of the capital is a rectilinear heart type shopping center, the internal structural design of the 15 storeyed store, regard every three floors as a theme to plan, create the scene of the street of shopping of five different themes; There is the city of the capital the known enterprise garrisons in, combines Fashion, Food, Life Style, Leisure and Entertainment outside nearly one thousand China; Create unprecedented Total Shopping Experience and do shopping to experience in a totally new way.

Celebrate Beijing Mr. and U.S.A. s victory to have Jerde partnership international building office by the intersection of founder and Shen, plan the body of main building of L shape that China initiates, combine the design of store of the largest spheroid structure in the world. Such creative building tactics, come from the Chinese legend one pair of dragons cherishes the pearl the idea behaves, especially up to more than 70 metres being chosen empty Grand Canyon designing, the imposing manner of the city of the capital is outstanding that seem even more.

Its unique and dazzling architectural design, no matter daylighting and building space match in excellence or beauty in the world-class building, it may be the Pearl of the Orient of the new century!