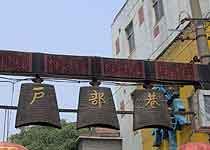 Ministry of Revenue lane lies in the free way of Wuchang, border on Jiefang Road in the east, borders on the south bank of the Changjiang River in the west, road less than 4 meter wide, can only 3 pass to 4 people side by side, one long meter of century-old old lanes, its flourishing breakfast group of stalls are prolonged in 20 years. At time of Qing Dynasty, this lane has gained the name because of adjoining yamen of Taiwan of fence.
The people in Wuhan will use and call early Too early . One ones that come from Qing Dynasty at first in this a word of Hankow bamboo . And then in the other cities perfunctory breakfast that even neglected, the intersection of Wuhan and people and the grand one promotes celebrates the New Year at will Like cross Position. With snack Well-known Ministry of Revenue lane, it is Wuhan most famous a lane of breakfast .
The lane entrance, are imprinting performing artist He Zuo s joyous short biography written of city famous folk art forms of Wuhan: the breakfast rice of flavor of Chinese is in the van, it will be hot and fresh soon in Ministry of Revenue lane ,Stand lane mouth two of other end stone lion,above calligraphist YiJing Chens famous inscribe Mount Tai stone engraving style: the first lane of breakfast of flavor of Chinese .
The shop front of Ministry of Revenue lane is elaborated by family, it is a household upstairs, the ones that depended on for existence downstairs ate the shop. The breakfast here is tough enough, enough for taste. Mother-in-law Shi s heat bes in the surface, fresh fish of sister-in-law Xu paste the intersection of soup and powder, beef noodle, getting high the intersection of porridge, thin pancake and Wan and rice wine of married couple 30 multi-type special snacks of married couple of Chen, have kept the characteristic of the cooking culture in Wuhan well.